Ecological warriors, natural pest control, beautiful magical creatures and unique, highly adapted nocturnal raptors. These are some words that come to mind when describing owls. There are 230 documented species of owls in the world which live in nearly every corner of our globe (except for the polar ice caps and some remote islands) and come in a variety of shapes, colours and sizes.

South Africa is home to 12 different owls and five owl species are regularly spotted while on a safari at Kariega Game Reserve in the malaria-free Eastern Cape.

Many of our Kariega safari guests have only seen owls on television, in movies or read about them in books. Most have not had the privilege of seeing an owl in real life. Our safari guests are often fortunate to spot an owl when leaving camp on early morning safaris, returning from the late afternoon game drives or during night drives with their experienced guide.

Although this nocturnal bird species is not always easy to spot, if you know what to look for you will have a better chance of a sighting while on your Kariega safari.

We have included the top five owl species to spot on a Kariega safari in size order from smallest to largest. The African barred owlet and the African scops owl are tied as the smallest of the five species found at Kariega Game Reserve.

The African barred owlet (pictured above) is about 17 cm (6.7 in) in length and has a wingspan of 40 cm (16 in). The little owl is a greyish brown colour on its back and upper body and has a white chest with brown spots.

These owlets nest in tree cavities high off the ground to keep their eggs and chicks safe from predators such as jackals, honey badgers and snakes. Both parents take care of their offspring and feed them on a high protein diet including grasshoppers, lizards, small rodents, frogs and caterpillars. 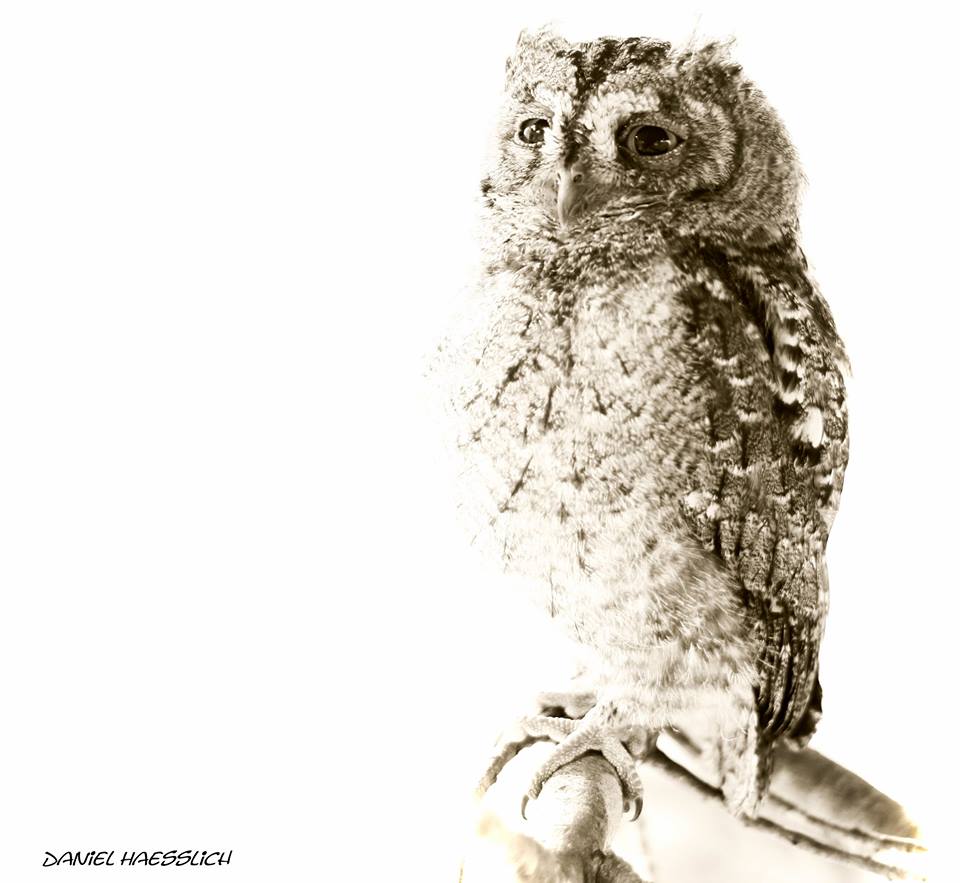 This little owl's scientific name is Otus senegalensis. Otus is Latin for 'horned' and senegalensis refers to Senegal, the country where the species was first described. The African scops owl is also 17 cm (6.7 in) long and has a wingspan of 45 cm (18 in), very slightly longer than the African barred owlet.

The African scops owl (pictured above) has grey and brown feathers. Their plumage has fine black streaks and white colouration that helps to camouflage the bird when they sit next to a tree trunk. During the day or when trying to hide, this little owl will elongate its body and blend into the surroundings. This is the smallest owl species in southern Africa to have ear tufts.

These two small owl species can be found in similar habitats, including valleys with thick bush and in Euphorbia thickets.

If you want to find these little birds of prey it is best to go into the bush at around dusk and later, and to sit very quietly and just listen. The very unique 'prrrrp' at about five second intervals will give the owl away. The chances of hearing them is high, but the trick is to also catch a glimpse of them. Your Kariega safari guide will use a spotlight and shine it in the direction of the call. With some luck, patience and the skills of your experienced guide you may just see a scops owl in the African bush.

Read our blog about night drives to find out what else you could spot while out on an evening safari.. 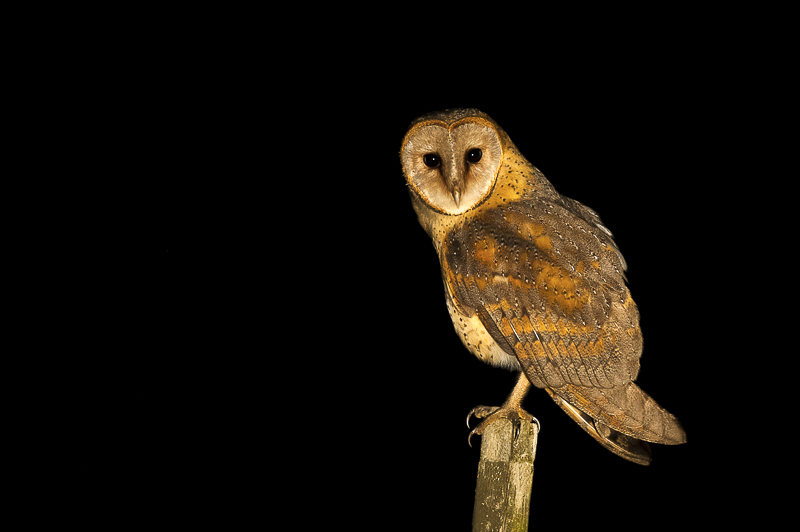 Barn owls are found all over the world and there are a total of 28 subspecies. There is a similar looking sub-species that is quite common in the United Kingdom. As their name suggests, barn owls like roosting in barns, roofs or any secure structure they can wiggle themselves into as long as it is high up and weather proof. Barn owls are larger than the African scops owls and are between 33 and 39 cm (13-15.3 in) in length with a wingspan of 80 to 95 cm (31.5-37.4 in).

Barn owls usually lay around nine eggs, a larger number for a predatory bird. They will alternate the days they are laid so the chicks are all slightly different ages.

The male barn owl will provide food for the female and chicks from before eggs are laid and carries on for about two weeks after all the eggs have hatched. The female will then will start to hunt again and bring food home for the fast growing chicks to keep up with the demand!

Barn owls are easily recognised with their light brown colouration, white heart shaped facial disk and pale under parts. You will most often hear them before you see them as they have a very eerie screeching call that pierces the night.

The African wood owl, or "ibengwana" in our local isiXhosa language, is about 33 cm (13 in) in height and weighs between 240 and 350 grams (8.5 - 12.3 oz). They are found across a wide range in Africa, from Sudan to Congo in the north to the east coast of South Africa in the south.

They are the most common owl in sub-Saharan Africa.

African wood owls can also be found in Britain, but these are believed to be escapees from local zoos and not migrants from Africa.

As their name suggests African wood owls like living in wooded habitats as this is where their colouration works best to camouflage them. They are completely nocturnal and only come out after dark. These owls eat creatures such insects, rodents, frogs, reptiles and other birds. They will drop down onto an unexpected prey or catch it in flight with their talons.

Their call is a pleasant series of hoots, 'WHOO-hu, WHOO-hu'. The female's call is higher pitched than the male.

The wood owl's breeding season is between July and November and they nest in a natural tree cavity usually at least three meters above the ground for safety. This will be their nesting site for many years unless something deters them. African wood owls usually lay two eggs which the female incubates for approximately 30 days. After hatching the nestlings can usually fly at about six weeks old but they remain dependent on their parents for food and safety for another four months. The spotted eagle-owl (pictured above)occurs in sub-Saharan Africa from Kenya and Uganda south to the Eastern Cape in South Africa. They are a medium-sized species of owl with a length of around 43 – 50 cm (18 in) and a wingspan of 113 cm (44.5 in). Females are larger than the males.

These owls are often seen in the wild as well as in South Africa's residential areas where they sit on roof tops waiting to hunt rodents, birds and other small animals. They have even been know to swoop down on pet rabbits and chickens!

Spotted eagle-owls can select a wide variety of nesting sites. These could be on a rocky outcrop, in a tree on on the ground. These owls are fiercely protective of their eggs and chicks and can be very aggressive to anything who comes too close.

This owl species has prominent ear tufts which were previously believed to be their actual ears. Recent research has found that the tufts are just longer feathers on the top of the owls heads. Their function remains a mystery.

In some South Africa cultures there are a dark cloak of superstition that hangs over owls. Traditional Xhosa culture believes that owls are evil birds or spies and that they are linked to death. If an owl sits on the roof of your house or nearby, it is believed that someone in your family will die. So it comes as no surprise that some people will go to great lengths to destroy or chase owls away from their homes.

The most common causes of death for owls are collisions with vehicles and poisoning.

Barn owls and spotted eagle-owls often use poles next to roads to wait for unsuspecting prey to run across the open area. When the owl swoops down to catch the prey it can be easily hit by an unsuspecting oncoming vehicle.

Owls are also regularly die due to secondary poisoning. There are no such thing as a eco-friendly and safe rat poison. The rat and bird or animal that eats the rat will all die. Poisoned rats and mice often die a slow and agonising death and are easily spotted in this state by owls. The owls will also feed the poisoned rate to their chicks without knowing that this could be their last meal. A whole owl family could be wiped out in a few days after feeding on a poisoned rat. Our Kariega Foundation operates various environmental education programmes (pictured above) to talk to school children about owls and other wildlife conservation issues.

We are fortunate to have a very passionate educators and owl rehabilitation experts in our area. Chris Pretorius from the Caring Owl Sanctuary often joins our team to give educational talks at schools. Chris occasionally also gives informative owl talks for our Kariega safari guests. Chris also does a lot of rehabilitation work focusing especially on owls and other raptors.

The Kariega Foundation has worked with Chris on various owl release projects where barn and spotted eagle-owls were released onto Kariega Game Reserve. Read more about our owl conservation project.