Ready to Welcome You...

As we look back at the past, it is truly shocking to think that we as humans were responsible for the demise and destruction of our wildlife and its environment. The extinction of many species of wildlife was also the result of our ruthless behaviour and the desire for us to own our own piece of paradise with no consideration for the consequences. Fortunately it was not all in vain and through the vision of certain conservationists and businessmen in the Eastern Cape, the tables were turned. Kariega Game Reserve, it has to be said, is one of those pioneers in the development of a unique conservation project.

Born from the vision of one man, Colin Rushmere, the history of Kariega Game Reserve is an inspiring one. As recently as 33 years ago, the existing Kariega Game Reserve was owned by 21 different farmers. With this reality at the forefront of their minds, it would be accurate to say that the gradual growth and development of the now expansive 11,500 hectare reserve is one of the most accomplished conservation projects in the Eastern Cape.

In 1989 the Rushmere family, who had always displayed an innate love and appreciation for nature, purchased the first portion of pristine land bordering the upper reaches of the Kariega river. They began to develop a vision for the future, involving moderate expansion over the next few years. It took a further 30 years to complete the desired land assembly. This vision was largely actualised due to a number of important partnerships.

The first, and most meaningful partnership was struck in 1998, when a local farmer and neighbour, Tony Fuller joined his farm with Colin’s and they managed to buy the farm in between. This grew the reserve to 2,000 hectares and incorporated the beautiful Kariega river within the reserve.

Since then the Fuller family have been an invaluable cog in the growth and management of Kariega Game Reserve.

From an eco-tourism and conservation perspective this was a critical move, as it was the first time Kariega Game Reserve was big enough to re-introduce species such as white rhino and begin hosting international guests.

In 1999 Main Lodge was opened, followed by the more intimate and exclusive Ukhozi Lodge in 2002.

Up until 2002, when Ukhozi Lodge opened, the reserve only comprised approx. 2,000 hectares bordering onto the Kariega river. In 2003 an additional 3,500 hectares, which bordered the Bushmans river, was added to the reserve. This additional land made Kariega large enough to introduce the Big 5. In May 2004 the first elephant herd and lion pride were introduced onto the reserve.

In 2006 Kariega then acquired 500 hectares across the Bushmans river which resulted in the unique River Lodge opening in October 2006. At the same time an historic old farmhouse (built in 1908) was restored and The Homestead, a private sole use lodge, joined the portfolio of lodges.

In early 2007 the opportunity arose to acquire a unique and beautiful 4,000 hectare property adjacent to Kariega, thus taking the reserve to approx. 10,000 hectares. Owned by the same Settler family since 1823, it is an integral part of the history of the region. The land is truly spectacular and provides a fabulous backdrop to Settlers Drift, Kariega’s 5-star luxury tented lodge, which opened in December 2014. Settlers Drift has completed Kariega’s portfolio of five lodges now ranging from 4 to 5-star.

Habitat expansion and restoration is essential to the survival of many wild and endangered species and the current focus for many conservationists. In 2021, Kariega Game Reserve received the donation of a critical piece of habitat in the Bushmans River Valley. This exciting habitat expansion project has grown the reserve to 11,500 hectares and ensures the conservation of approximately 25 kilometres of the Bushman's River tidal estuary, range expansion and additional carrying capacity for elephant, white and black rhino, as well the opportunity for the reintroduction of additional apex predators such as the endangered cheetah.

Securing this critical piece of land for conservation also creates the opportunity for the creation of connected wildlife corridors within the Eastern Cape over time.

Kariega’s landscape and topography is arguably the most beautiful of all the Eastern Cape game reserves, resulting in stunning views and vistas. Having two major rivers incorporated into the reserve (the Kariega and Bushmans rivers) also adds enormous beauty and value. Kariega Game Lodge also enjoys extremely high game carrying capacities which results in their game viewing and birding experience being exceptional. The amazing story of rhino poaching survivor, Thandi, and the birth of her four calves has captivated the world and has been an inspiration to many.

Today Kariega Game Reserve is still family owned and operated by the Rushmere and Fuller families with Colin and Tony's children (and some grandchildren) working passionately within the business. 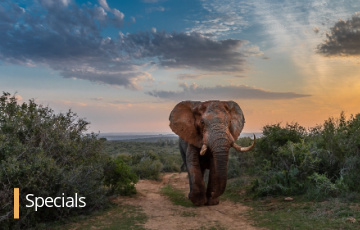 Find out more about our region's amazing ecological history and conservation efforts on our Wildlife History page. 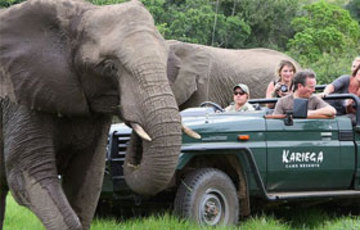