Did you know that there are only two species of South African wild pigs? These are the bush pig (Potamochoerus larvatus) and the common warthog (Phacochoerus africanus). In South Africa we see a subspecies of this warthog called the southern common warthog (Phacochoerus africanus sundevallii). The bush pig, also spelled bushpig, and the warthog are cousins and have some similarities but quite a few differences.

A bush pig looks quite a lot like a domestic pig. They have an elongated head which is covered in dark brown coarse hair, a white mane, white ear tufts, blunt snouts and small eyes. A bush pig is definitely not going to win any beauty pageants! Fortunately they don't have to as they have a much more important role to play in our ecosystem. Some of their key functions are cleaning up rotting meat, eating fruit and spreading the seeds, digging to expose nutrients for other creatures to eat and providing food for predators. Predators that like to eat bush pigs include lions, leopards and hyenas. 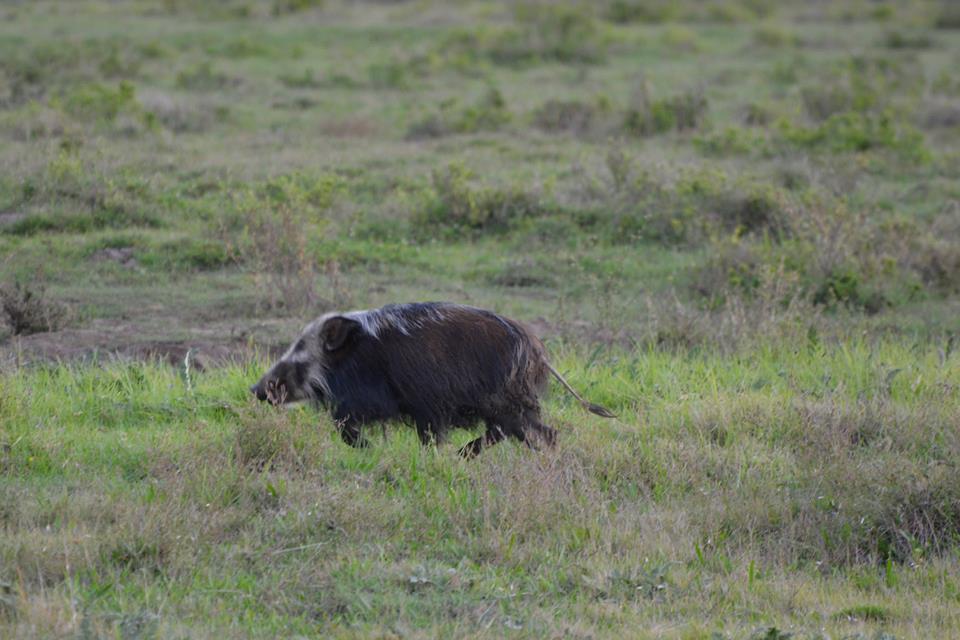 Here are a few interesting differences between bush pigs and warthogs:

Bush pigs are generally bigger than warthogs and similar to European wild boars. The bush pig is more stocky and powerful than its cousin. The maximum weight of an adult male bush pig is 150 kg (330 lbs) and they can measure up to 100 cm (39 in) at their shoulder. Adult male warthogs can also weigh up to 150 kg but they usually only measure up to 85 cm (33 in). The strong and solid body of a bush pig mean they are a force to be reckoned with and shouldn't be approached on foot.

As their name suggests, bush pigs are often found in thick bush, forests or riverine vegetation. They can also be spotted on grasslands. Warthogs tend to stay on the open plains and rarely move into dense bush.

Bush pigs and warthogs have the same fighting tools including blunt tusks on the top jaw and smaller razor sharp tusks on the lower jaw. The tusks of a bush pig are much shorter and less visible than those on a warthog.

Bush pigs don't run with their tails up like their cousins. They also have less prominent warts on their muzzle.

Warthogs feed on grass, roots, fruit and tubers but don't often eat meat. Bush pigs are omnivores and they like the same food as warthogs with the addition of earthworms and insect larvae. They are also known to be scavengers and feed on carcasses that they find in the bush. Read our blog about an interesting sighting where bush pigs cleaned up a zebra carcass. A bush pig sow (female) will make a nice comfortable nest from a heap of grass which she bites off and collects. She will use this as a nursery for her piglets. Piglets are most often born in summer (October to March) after a gestation period of approximately four months.

The piglets are decorated with with dark and light brown longitudinal stripes along their bodies and always stay very close to their mothers. Their stripes help them to be camouflaged in the leaf litter when hiding from predators. The piglets will be introduced to the rest of the sounder (group) and then the boar will protect them. This protection is short lived as when the piglets are around six months old they will be kicked out from the group by the dominant pair and the piglets will need to go out and find their own territories.

Bush pigs are social and live in small groups. The group consists of a dominant male and female and young animals. Bush pigs are not popular with crop farmers as they can cause significant damage. Bush pigs will feed on any type of crop including corn, tomatoes, potatoes and sugar cane. As a result they are often hunted and killed by farmers. Thankfully we have a healthy population of wild bush pigs at Kariega, although they are rare to see. The most regular sightings of bush pigs and other secretive animals such as aardvark, porcupine and caracal are during night drives.

Can bushpigs and domestic pigs breed.