The name porcupine comes from the Latin words porcus (pig) and spina (spine/quill). In South Africa the Afrikaans name is ystervark, meaning iron pig, and in isiXhosa it is called incanda. The collective name for a group of these large rodents is a prickle of porcupines!

All porcupine species fall into a very diverse order called Rodentia. There are around 2,050 living species classified under this order, the largest being the capybara which weighs between 35 and 66 kg (77-146 lbs) and the smallest is one of the pygmy jerboa species. The most distinguishing feature of the order Rodentia is a pair of continuously, razor-sharp incisors used for feeding. The word Rodentia is derived from the Latin word Rodere which means “to gnaw”. This can be seen in mice, rats, chinchillas, hamsters, beavers and squirrels to name only a few. 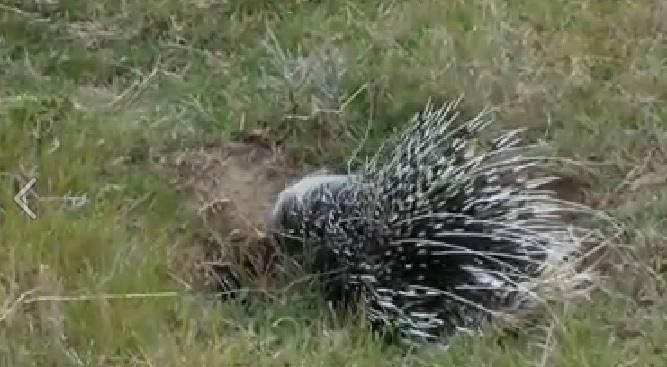 Most wildlife have some sort of adaptation to protect themselves against predators and rivals. Elephants have their size and tusks, lions have sharp teeth and claws and even a tiny bee has a sting to ward off danger. Porcupines have a prickly and very dangerous supply of sharp quills.

The prickly quills of a porcupine are actually modified hairs that form a spiky defensive shield when needed. The black and white quills face towards the rear of the porcupine and usually lie flat. When annoyed their quills become erect.

Porcupines have a variety of different types of prickly quills, each with different functions:

Cape porcupines are mostly nocturnal and thus active at night. Your best chance to see these big rodents on safari is during a night drive or, if you are fortunate, at the end of the afternoon drive once night has fallen. Porcupines are very skittish and if you see a flash of black and white, that may be your only sighting of one these strange creatures. They are also very difficult to photograph!

During the day porcupines hide away in large underground borrows. These could be holes that were dug and used by warthogs or aardvarks or ones that they have made themselves. The last porcupine into the burrow will block the hole entrance with its' quills to protect the rest of the family.

Cape porcupines can live in family groups and are also often seen in pairs. A group is called a prickle of porcupines. Porcupine babies are called porcupettes and are thankfully not born with sharp quills! The quills of a baby porcupine are soft and bendable and harden within a few days.

Cape porcupines are herbivores and their diet includes leaves, twigs, bark, fruit, berries, farm crops, tree roots, tubers and bulbs. They also occasionally chew on bones to get a calcium fix needed to maintain their own bone structure.

Farmers do not like porcupines as they often dig up their crops including corn, wheat and vegetables. Some farmers set traps to capture or kill these spiky rodents. Click to watch a video of a porcupine that was rescued and released safely on Kariega Game Reserve.

Lions, leopards and hyenas are the most common predators of porcupines. However, porcupines can be dangerous to these wild animals, especially if they are not experienced or quick enough, as they can end up with quills stuck deep into their flesh. These wounds can become infected and cause severe discomfort to the predators. This sighting of lions and a prickle of porcupines was captured during a night drive by Kariega guide Chelee Brown. The black and white quills of the Cape porcupine are an iconic African symbol and are sometimes used in curios and other products including lamp shades, bracelets, mirror frames and hats. It is very unlikely that these quills have been ethically harvested. One can only pick up a handful of quills that are naturally shed by porcupines in the bush. To gather the amount of quills used in these products it is most likely that the porcupine would have been killed. We do not advise any visitors to buy products made from porcupine quills.

Thanks Chelee and Jo for sharing and great photos