Kariega Game Reserve had the privilege to host James Mwenda, one of Sudan's carers, at the end of May and our team learnt so many lessons from this passionate and experienced rhino conservationist.

There are two sub-species of white rhino, northern and southern, named after the region in Africa where they are found. It is estimated that there are less than 21,000 white rhino remaining - all but two belong to the southern white rhino sub-species. The white rhino species is classified as near threatened on the International Union for Conservation of Nature (IUCN) Red List.

The last two northern white rhinos are protected 24/7 by armed guards at Ol Pejeta Conservancy. The only hope for the survival of their sub-species is the development of in vitro fertilisation (IVF) techniques for rhino.

The southern white rhino sub-species that live at Kariega are constantly under threat from poachers who want to kill them for their horns. The horn is sold to people who incorrectly believe that rhino horn can cure disease. In March 2012 three rhino were attacked by poachers and their horns were brutally removed. Two of the rhinos died but one female, Thandi, miraculously survived and continues to live with her crash at Kariega.

The rhino at Kariega are protected by our Save the Rhino anti-poaching unit. Our team was inspired by the rhino conservation efforts at Ol Pejeta and the care given to Sudan and the two female northern white rhino. Sudan had a few caregivers who fed him and kept him company. James Mwenda was one of Sudan's carers and developed a very strong bond with him over his last few years. The duo would sit together for hours and enjoy each other's company. James would ask Sudan questions and Sudan would sometimes respond with a long stinky fart as an answer!

After Sudan died James felt the need to share his friend's story with the world. He wanted to create more awareness about the imminent extinction of the northern white rhino sub-species that was happening right in front of his eyes. He used social media to help him with this very important task and posted this photograph, courtesy of The Last Man Standing documentary, and a beautiful tribute to Sudan on his Facebook page. 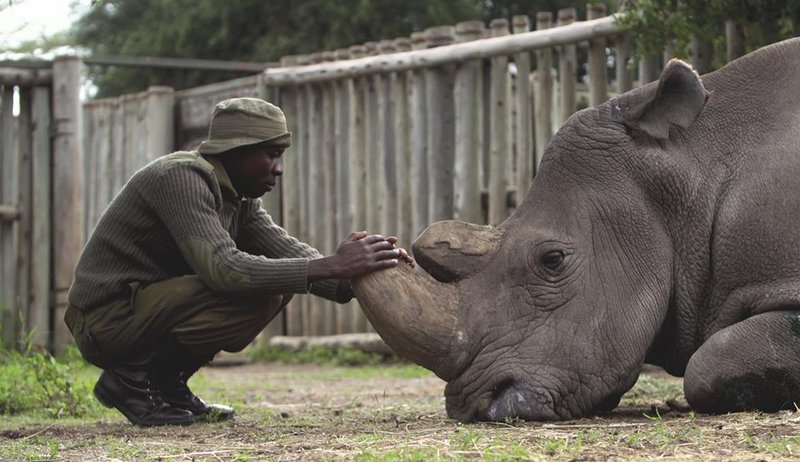 In May 2018 a non-profit organisation called Dancing for Rhinos contacted Ol Pejeta and James about the opportunity for James to leave Kenya for the first time and come to South Africa to be a guest speaker at the 2018 Dancing for Rhinos fundraiser in Pretoria. An audience full of rhino and animal lovers filled the beautifully decorated Deutsche Schule Pretoria hall for an evening of conservation inspired dance, amazing cuisine and networking with like-minded people.

James had everyone on the edge of their seats as he spoke about his time with Sudan, the problems rhinos face, how we should sensitise ourselves to nature and that the change starts with us. It was an incredible evening. After the 2018 Dancing for Rhinos event James shared his experiences with a number of wildlife conservation organisations in the area. This inspired everyone to continue to strengthen collaborations, exchange ideas and forge forward with rhino conservation and awareness efforts. James also spoke to dancers from Dance to be Wild (pictured below) and visited a rhino orphanage with the Rhino Pride Foundation. The last leg of James' trip in South Africa was to stay at Kariega Game Reserve and to meet rhino poaching survivor Thandi. The 13 hour trip by car from Pretoria to the Eastern Cape sped by as James, Jo and Daniel Haesslich chatted all the way about varying topics including Kenyan and South African culture, road conditions, beautiful landscapes and of course rhino care and conservation.

Jo and Daniel are both key members of our Kariega Game Reserve team. Daniel leads the Kariega Save the Rhino anti-poaching unit and Jo is the Kariega Foundation co-ordinator and part of the Kariega media team. The couple are both qualified and experienced field guides and talented photographers. The photos and video in this blog are courtesy of this duo.

Kariega Game Reserve and the Kariega Foundation hosted James for a two day safari experience. This included breathtaking game drives with an array of wildlife and landscapes, a Facebook live video, a rhino dehorning procedure and a close-up interaction with poaching survivor rhino Thandi and her family.

As many people know, Thandi roams free on the Kariega plains and can be difficult to find, especially when we really need to see her! She played a game of hide and seek before finally coming to meet James. James felt privileged to spend some time with her and her two calves, Thembi and Colin. Lessons: Keep Connected to Nature and Fight for Rhino Conservation

It was a life-changing trip for James but also an inspiring one for everyone who met him during his week in South Africa. Everywhere he went his passion for nature and his experiences with Sudan inspired and motivated people to never give up and to keep fighting for the conservation of nature and threatened wildlife. His message is to keep connected to nature wherever you are and to leave a legacy and future for the next generations to come. He says in his eulogy to Sudan:

"Good bye Sudan, I don't need to say it here that I loved you. You know it well from all the talks and the moments we had together. Being with you for the last few years completely changed me and, as you taught me daily, I (will) continue to teach and inspire my fellow humans to be conscious and sensitive of our environment. I promised to be your voice (I ain't sure whether I duly and diligently fulfilled that) but I did my best.

When I look back, in my years of care taking you, my sadness and the essence of losing you is overcome by a contentment that I gave you all the best. Sudan I don't regret anything as deep within my heart I gave you everything.

What I regret most is whether my fellow humanity has learned from your existence. I tried as much to help them hear you through my thoughts and the lessons I learned through our personal day to day life, though still my voice has been small, I have testimonies that you have left an imprint in the hearts of many especially those I interacted with.

If I was powerful in the face of earth and conservation world 19/04/18 would be "Sudan, the legend day" a day when parents should take their kids out and teach them how and why we need to embrace the environment. A day where a pic of Sudan could be presented in classroom and have the kids draw Him, so that they are conscious of extinction and how Sudan's existence meant a day what we could ask those we know what they knew about the environment.

I never expected to hear a thank you from you, no rewards, no clapping for congratulations, no job well done words, and no praise for it. Sometimes the commitment, sacrifice and love of an animal can only be know by the animal, God and the caretaker only. Catalyzed by the bond they share and the affection.

All I can ask you is your blessing buddy, that blessing means everything to me, old as you were I celebrate your live well lived.

On the other side of life greet Lola, Saut, Nasima, Nabire and the rest of the rhinos, tell them that some humans still upholds the madness that rhino horn is a cure but their are others that still are fighting for your future.

The big question is what does Sudan's existence and His death mean to you? Let us all purpose to learn.

I will try my best to honor all that we talked about and live for what you have taught me.