This video captures some of the best South African safari sightings at Kariega Private Game Reserve in the malaria-free Eastern Cape. These beautiful wildlife encounters were captured during the last week in August 2020 by filmmaker Fergus Clark.

Kariega Game Reserve is located a few kilometres from South Africa's Indian Ocean at at the end of the Garden Route, a region that stretches from Cape Town to Port Elizabeth. The nearest airport is 80 minutes drive away in the city of Port Elizabeth.

This South African safari reserve spans across 10,000 hectares of pristine wilderness and is home to the famous Big 5 as well as a multitude of wildlife including hippo, giraffe and zebra. The reserve is also a paradise for birdlife, including resident and migrant birds.

Kariega is a family-owned and operated private game reserve, giving it a warm and welcoming atmosphere. There are five superb safari lodges - Settlers Drift, River Lodge, Ukhozi Lodge, Main Lodge and The Homestead.

South African residents can book hugely discounted safari deals at all lodges until 15 December 2020. Find out more about our safari specials at www.kariega.co.za/sa-specials. Contact us at reservations@kariega.co.za to make an enquiry or booking.

We are also offering flexible booking conditions for international safari guests. Find out more on how to book with no cancellation fees or deposits on www.kariega.co.za/covid-19 and contact reservations@kariega.co.za to enquire. Kariega Game Reserve offers excellent close up sightings of elephants, rhino, buffalo, giraffe, hippo, lion and many other wildlife. Safari experiences with the calm herds of elephants, including newly born calves, youngsters and females are regularly enjoyed by guests.

"A first class game reserve with exceptional staff and facilities. Will certainly hope to return in the future and have even thought of planning our grandsons 18th birthday here in 2035!!! The Big 5 were all seen and the engagement with the elephant herd magical, but it was all the animals and landscape that made the visit special," says past guest Mark.

Past guest Rachel comments: "We got to see some elephants really close up and they were not at all bothered by our vehicles at all. Our guide was excellent too. Definitely recommend a stay here."

The bond between the mother African elephant and her calf is a very special one. If the calf is a female, she will likely remain with her mother her entire life. A young male does not form this lifelong bond and will become restless from the age of about twelve. After separating from their birth family herd, bull elephants may join another herd, move from family to family, spend time alone or gravitate towards other males. African bull elephants only experience their first musth (surge of testosterone) at about 30 years of age.

As different elephant families intermingle, males find other males to play fight with (as seen in the video). This play helps them to understand their own strength and learn the tactics they will need to use as older males when fighting for dominance and the right to mate.

Play fighting is common among bull elephants, as are other social interactions such as greeting, disciplining, celebrating, threatening, accepting a challenge, bluffing, submission and mourning.

Bull elephants spend 12-18 hours a day eating, drinking and moving around to find food. Adult bull elephants can eat up to 350 kilograms (770 pounds) of food and drink up to 200 litres (50 gallons) of water in one day. Kariega Game Reserve is the home of a pride of lions who roam free in the wilderness area. One of the females gave birth to a litter of four cubs in early June 2020. The above photograph captures the youngsters at around four months old. Safari guests enjoy regular sightings of the pride.

Uniquely for cats, lions live and hunt in groups called prides. They have a highly evolved social structure which consists of several related females, their cubs, and two or three territorial males.

The African lion (Panthera leo) is one of the Big 5 and a must-see for most African safari travellers. These apex predators once roamed freely across Africa but are now only found in wildlife conservation areas such as Kariega Game Reserve.

Lions are listed as vulnerable to extinction by the International Union for the Conservation of Nature (IUCN), which determines the conservation status of species. A report released in 2019 estimates that there to be fewer than 22,500 wild lions in Africa, and only about 2,070 in South Africa.

Lions are the largest of Africa’s cats, and are symbols of strength, pride and courage. 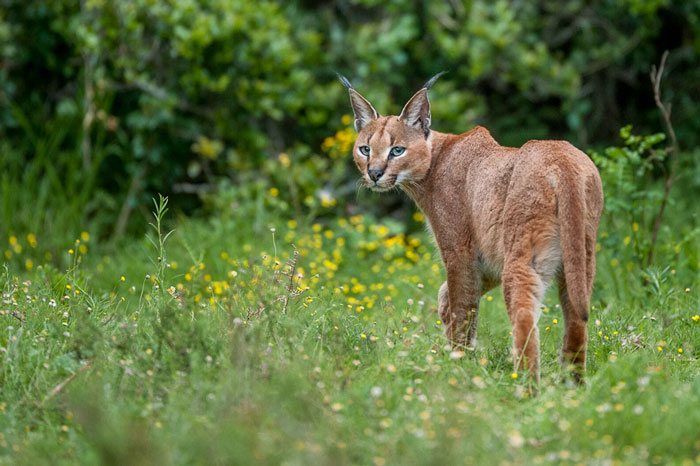 Another top South African safari sighting included in the video is of two caracal. These medium-sized wild cat are one of South Africa's 299 species of mammals. They are rarely seen as they are nocturnal and to see them in the day is extremely fortunate.

Caracals have a golden sand to reddish tan coloured coat, long legs, a short face and black tufts reaching up from their longish ears. The cats are usually about 40–50 cm (16–20 in) at their shoulders and can weigh up to 18 kilograms (40 lb).

Caracals are carnivores and are usually seen alone or in pairs. Their reported highest population density is in the mountainous terrain of the Eastern Cape province of South Africa. This environment is included in the 10,000 hectares at Kariega Game Reserve. The secretary bird is a large bird of prey that is frequently seen on the open grasslands at Kariega Game Reserve. The birds spend much of their time on their nest or hunting for food, mostly snakes, rodents, reptiles and insects.

The name secretary bird was thought to originate from the bird's crest which looks similar to the writing quill male secretaries wore in their wigs in the 19th century. More recent research suggests that it is more likely to have originated from the Arabic words ‘saqu ettair’ meaning ‘hunter-bird’.

Although secretary birds are capable flyers, with a wingspan of over two metres (seven feet), they rarely take to the sky. They prefer to hunt by walking on the ground and killing their prey by stomping on them with their long, scaly legs or stabbing them with their beak. They then eat their prey whole!

South African residents can book hugely discounted safari deals at all lodges until 15 December 2020. Find out more about our safari specials at  www.kariega.co.za/sa-specials. Contact us at reservations@kariega.co.za to make an enquiry or booking.

We are also offering flexible booking conditions for international safari guests. Find out more on how to book with no cancellation fees or deposits on www.kariega.co.za/covid-19 and contact reservations@kariega.co.za to enquire.

Video thanks to Ferg Clark. Images thanks to Brendon Jennings and Michael Price.