Working in conservation is a journey, with many ups and downs; twists and turns. The serious, global issues we face often feel overwhelming and insurmountable. The low moments, particularly for those working with wild animals facing extinction or persecution are heart wrenching. It is the special moments, when collective, long term efforts culminate in success, that inspire and energise us to keep moving forward.

This World Conservation Day, Kariega Game Reserve , is sharing one of those collective success stories, which has been beautifully told in this video, created by our friends and conservation partners at Helping Rhinos.

Last year on World Conservation Day, Kariega Game Reserve announced our exciting habitat expansion plans which were made possible by the generous donation of land by the philanthropic Ferguson family.

The donation carried massive conservation benefits including the protection of approximately 25 kilometres of the Bushman's River tidal estuary, range expansion and additional carrying capacity for elephant, white and black rhino, as well the opportunity for the reintroduction of additional apex predators such as the endangered cheetah.

From a deeply personal and sentimental perspective for the Kariega family, securing this additional habitat created a new territory for a rhino bull called, Colin, who is very close to our hearts!

Kariega Game Reserve, in partnership with the Kariega Foundation, prides itself on an inspiring conservation history and the role we currently play in the protection and preservation of 11 500 hectares of biodiverse wilderness, which is home to an abundance of bird and animal life including the critically endangered white and black rhino.

Ten years ago, on 2 March 2012, we were thrust into the forefront of rhino protection when the reserve suffered a triple poaching. Two rhinos succumbed to their injuries and tragically died; the third rhino poached was Thandi who survived the brutal attack and made a courageous recovery. Two years after her attack she surprised the world with the birth of her first calf, Thembi. Today her story is world famous. She is a huge advocate for the protection of the rhino species and her growing legacy, to date, includes four calves and a grand calf. For the Kariega family, Thandi’s story is a conservation miracle, sequenced with emotional lows and highs. Since enduring the trauma of her attack and painful recovery we have enjoyed mainly celebratory moments with the birth of each of her calves and grand calf, but in the back of our minds we knew that during 2022 we needed to address a major challenge with an uncertain outcome.

Thandi’s second calf, Colin, (named after the deceased and much-loved founder of Kariega Game Reserve, Colin Rushmere) was reaching sexual maturity, and needed to be translocated to his own territory. Unless we were able to expand the current reserve footprint and secure additional adjacent, suitable habitat for white rhino, we would have had to translocate Colin to another reserve in the area or further afield to another province where we would have no control over his protection.

There is no space for sentimentality in conservation and we were prepared to do what needed to be done, but in our hearts, we were hoping for a conservation miracle that would enable Colin to be translocated to his own territory, within Kariega Game Reserve.

Thanks to the Ferguson family, a conservation miracle is what we got, along with a new home for Colin and a new hope for the preservation of the rhino species in the Eastern Cape! 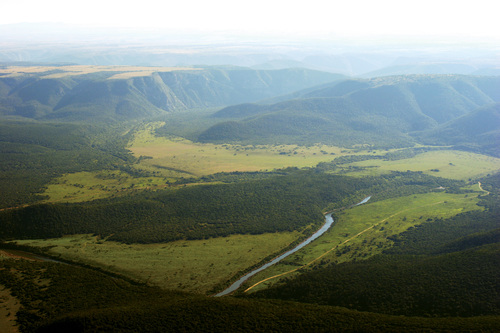 Since announcing Kariega’s habitat expansion project last year our ecology and wildlife departments have been very busy planning and implementing phase 1 of the extensive conservation and wildlife management plan to incorporate the new land into the greater Kariega wilderness. This includes erecting a new perimeter fence-line; upgrading existing fence lines and removing internal fences; the creation of new roads; extensive upgrades and new installations for surveillance and security camera’s; expanding our APU capacity; the translocation of a crash of white rhino (including Colin) and the introduction of a pair of cheetah.

The associated costs of this conservation project are significant and could not be carried alone.

The Kariega Foundation has repeatedly referred to conservation as a team sport and highlighted the importance of collaboration between philanthropic families and individuals as well as conservation organisations in order to achieve success stories like this one.

Thanks to the Ferguson Family, Helping Rhinos and everyone who supported their Room to Roam event; and the amazing Phil and Trish Liggett along with the inaugural members of their Freedom to Roam Adventure at Kariega Game Reserve earlier this year, all funds needed for phase 1 of the Kariega habitat expansion project have been raised and work on all fronts is moving along swiftly.

Kariega Game Reserve and the Kariega Foundation are deeply grateful to our conservation partners and friends. Together we will actualize the greater conservation vision for the Eastern Cape. Their support is our motivation to ensure we succeed with our pioneering and holistic conservation mandate which spans protection, preservation and the education and upliftment of communities. Our mission is to leave a legacy of rejuvenation for our planet, people and wildlife.

How Can You Get Involved?

On World Conservation Day, many of us look for ideas on how to support worthy conservation causes. With phase 1 of the Kariega Game Reserve habitat expansion project well under way, the Kariega Foundation is focusing on the needs for phase 2, which includes lion proofing existing fences; dropping a significant expanse of internal fencing; reintroducing a second pride of lion and a breeding herd of black rhino, as well as significantly growing the anti-poaching-unit.

If you would like to support Kariega Game Reserve’s habitat expansion project, phase 2, here are a few ways to ways to get involved.

Join a Freedom To Roam Adventure at Kariega in 2023

Join Phil and Trish Liggett’s, Freedom to Roam adventure at Kariega Game Reserve from 5 to 11 May 2023.

Freedom to Roam Adventures (FTRA), is a non-profit organization founded by Trish and Phil Liggett who use the platform to share their love of wildlife and wild spaces. The aim of FTRA is to offer their guests a great experiences and raise funds for various wildlife causes. Kariega Game Reserve hosted the inaugural FTRA group this year and it was such a huge success that we are doing it again in 2023!

The experience offers sixteen guests the opportunity to: Support Save The Horns

The Kariega Foundation have partnered with Global Conservation Force and Brave Wilderness on an ambitious fundraising campaign to support phase 2 of Kariega Game Reserve habitat expansion project and the vastly expanded anti-poaching requirements of the bigger landscape. Watch Coyote Peterson’s powerful video to Save The Horns. Donate to the campaign here .

Join our growing family of Thandi adopters through the Helping Rhinos Adoption Centre.

Donate to the Kariega Foundation

The Kariega Foundation is a non-profit trust and can accept donations from around the world. Donating is as simple as clicking the donate link, but the hope you give is immeasurable.

Create a linked fundraiser: Set up your fundraising page by visiting www.givengain.com/c/kariegafoundation. Your donation will automatically be transferred to the Kariega Foundation.

Make a direct deposit: Bank details can be found here.

Thank You for Joining our Conservation Team

Thank you for joining our conservation team. Spreading awareness is as important as making a donation if you are able. Every small donation is appreciated. Little bits end up making a lot!

If you would like to know more about our habitat expansion project or any of our other Kariega Foundation projects, please email foundation@kariega.co.za

We love connecting with our growing conservation team! Together we can make a significant difference and bring rejuvenation to our planet, people and wildlife.