We ask the question if a giraffe can swim as Kariega safari guide Wayne and his guests pondered this question when they found a male giraffe in the Bushman's river while on an afternoon river cruise at Kariega Game Reserve in the Eastern Cape. Senior guide Wayne talks to wildlife raconteur James Hendry about what he did when he saw just the neck of a giraffe sticking out of the river.

This photograph has been one of the most popular on our social media channels. Join us on Facebook, Instagram, Twitter and YouTube to see more wildlife antics at Kariega Game Reserve in South Africa. Researchers Use Computer Model to Test if Giraffe Can Swim

Kariega Game Reserve spans across 10,000 hectares of African wilderness and includes two rivers. The conservation area is home to the Big 5 and an abundance of wildlife, including giraffes, elephants, hippos, lions, rhinos and buffalos.

The team of experienced Kariega safari guides have never seen a giraffe swim or even venture voluntarily into the river. Guide Wayne thus commented: "one of the craziest things to come across is a giraffe neck sticking out of the river!"

This giraffe had become stuck in the river mud and was rescued by the Kariega conservation team. There have been two previous incidents at Kariega Game Reserve where giraffe have moved into the river and drowned.

Elsewhere in Africa there is only rare footage of giraffes wading into deep rivers when they have to, and no deﬁnite observations of them swimming. It has thus been assumed that giraffes are one of the few mammals that cannot swim or float.

The researchers found that "giraffes would be very poor swimmers, and that it might be assumed that they would avoid this activity if at all possible. Looked at another way, we conclude that giraffes can swim, but not at all well."

They also concluded that "a giraffe could float but its head would be very close to the surface and it would have a bit of a struggle to keep its nostrils clear. The drag on the creature's long limbs would make it pretty ungainly in the water. It's not impossible that a giraffe could swim, but it would be strenuous, and I could see why they would be reluctant to do it."

The below diagram by Dr. Henderson and Dr. Naish illustrates the issues with a giraffes ability to swim. Read our blogs to find out if hippo and elephants can swim:

How Did a Giraffe Get Stuck in the River Mud?

We will never know exactly how this giraffe managed to get stuck in the river mud. It is likely that he went down to drink, lost his footing and slipped into the sludgy river mud.

Giraffes are the world's tallest animals and have extremely elongated necks and long legs. Giraffes are only found in Africa and live in open savannahs and woodland areas. Having a drink is very challenging for a giraffe as they are over four metres (13 feet) tall and their necks are too short to reach the ground. In order to get to the water giraffes have to spread their front legs at awkward angles or kneel.

Giraffes only need to drink once every few days. Most of their water comes from all the plants they eat. Giraffes are herbivores and mostly feed on vegetation such as leaves, grass, twigs, fruit and roots. 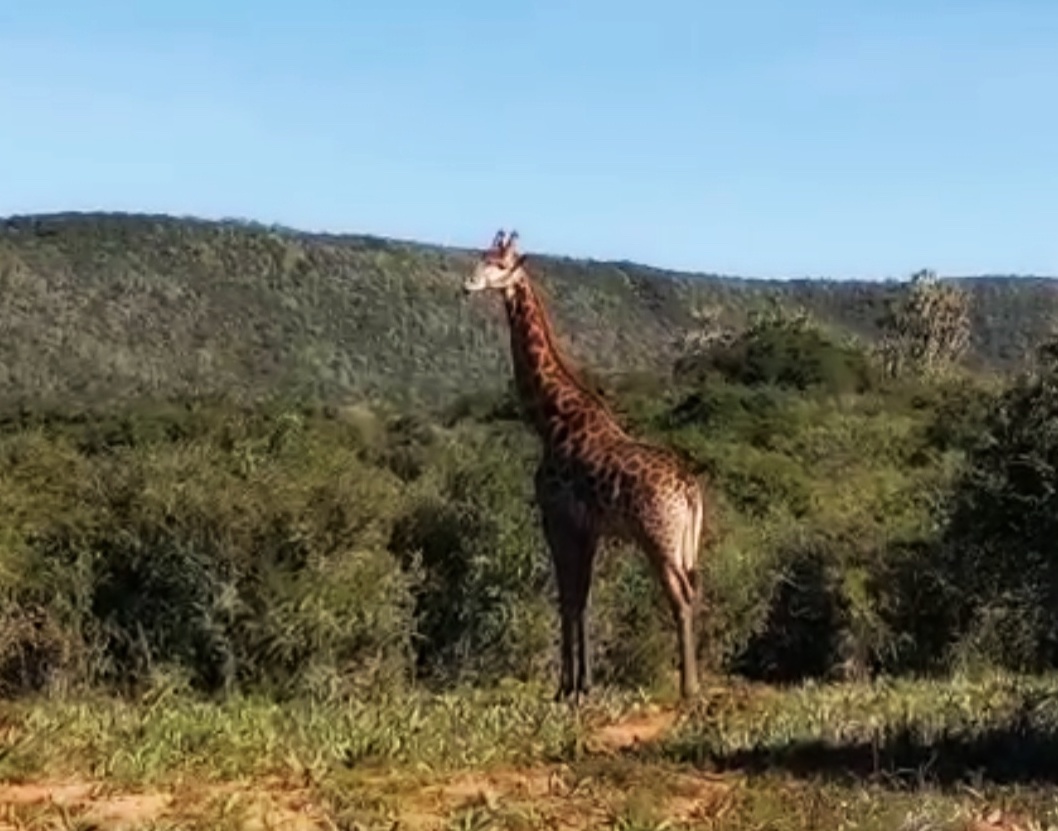 Did you have any delightful giraffe sightings on safari when you visited Kariega Game Reserve? Tell us about your experience on Facebook, Instagram, Twitter and YouTube. If you have any questions about giraffes and their ability to swim you are welcome to leave a message in the comment below.

Images thanks to guide Wayne and video thanks to Ferg Clarke.