The magnificent hippopotamus (ancient Greek for river horse) is most commonly (and frustratingly) spotted with its enormous, bulky body submerged beneath the water with only it’s nostrils peeking out. Only very lucky or patient nature lovers get to witness their various characteristics as depicted in this amazing video… which also reveals some interesting facts about this extraordinary African animal. 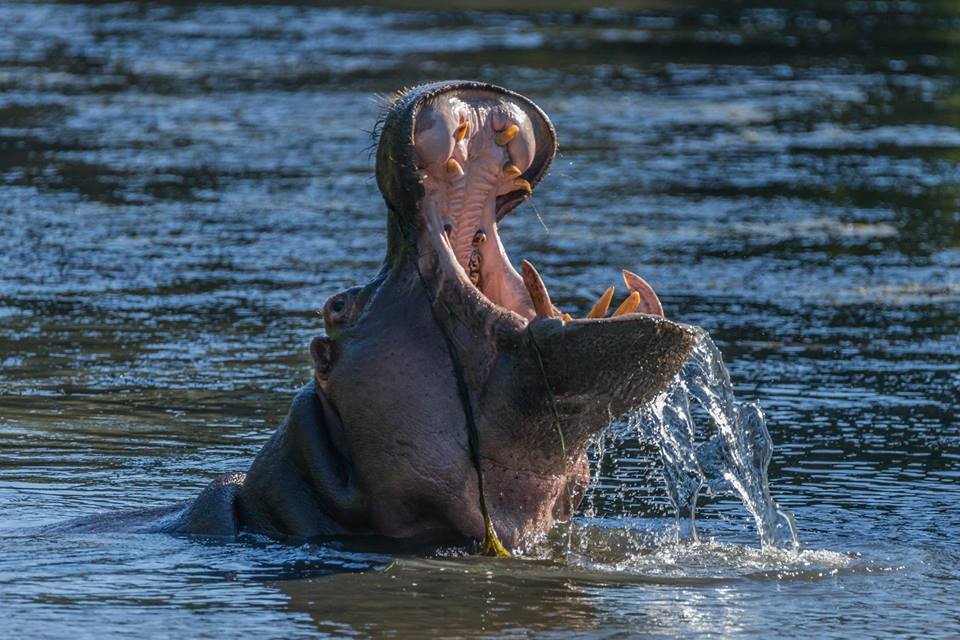 Wow thanks for the facts that really helped me on my essay!

I can consult you on this question.

Are hippos aquatic or land animals. Is the difference based on the time spent in water or land. Or is it based on where they get their food. In my mind Im thinking of the difference between hippos and dolphins plesase help clear my confusion

I don;t understand, Do hippos eat other animals?

Hi LOL. Thanks for posting your question: "Do hippos eat other animals?" The answer is no, hippos do not eat other animals but are herbivores and eat mostly grass. Kind regards from the Kariega team.

Hi Kwanda. Thank you for posting your question: "Are hippos aquatic or land animals?" The answer is that hippos are semi-aquatic mammals. This means that they live in both water and land. Dolphins are aquatic mammals as they only live in the water. Kind regards from the Kariega team.

Thanks! These are useful for the book that I'm writing, one of the main characters is doing a report on hippos!

do hippos poop in the water?

In Nat Geo article they state Hippos are 2nd largest land mammal behind only Elephant. Which is correct 2nd or 3rd ?

Hi Sissy,
Hippos definately weigh less than both white and black rhinos. They are the third largest land mammal. We're afraid that the Nat Geo article that states hippos are 2nd largest land mammal behind only elephant is incorrect. Kind regards from Kariega.

Hi eeek. Yip! Hippos poop in the water and on land!

im doing school so i needed this for facts.

This was really helpful and interesting!

The Nat Geo feed right below this says they're excellent swimmers, and can hold their breath for up to 5 mins??? Someone needs to fact check?y4

Hi Chad,
Thanks for reading the article. While hippos stay in the water for long hours they do not really swim. They walk underwater. The Nat Geo article is incorrect to say that hippos are good swimmers. Come and see for yourself on safari with us!
Kind regards from the Kariega team.

Can hippos see at night?

Hi Zee,
Thank you so much for posting your question on our website regarding hippos ability to see at night. Below is the response from one of our senior guides.
As far as I know hippos have decent eyesight in the day and at night. They have the ability to see well at night due to the reflective layer at the back of their eyes. The reflective layer is called the the tapetum lucidum. It is a layer of tissue in the eye of many vertebrates. It lies immediately behind the retina and is a retroreflector. It reflects visible light back through the retina, increasing the light available to the photoreceptors. So is basically contributes to the superior night vision of most nocturnal animals. It is this reflective layer that makes the animals eyes shine in the spotlight at night when we do our night drives.
Kind regards from the Kariega team.

Do hippos have eyelashes 😄😂😂??

thank you I am in school and this was very helpful