We are so grateful to Sarah Cobden-Ramsay for her most recent support of our black rhino protection and conservation project at Kariega Game Reserve. Sarah joined the Kariega conservation team and veterinary staff from Ikhala Vet Clinic at the reserve to watch the update to the black rhino tracking collars and to see the improvements to the surveillance cameras that are used by our anti-poaching unit.

The black rhinos were darted from a helicopter, their collars were updated, a health check was done and they were woken up again in mere minutes.

Black rhinos are listed as critically endangered on the IUCN Red List. This means that they are at extremely high risk of extinction in the wild. According to the World Wildlife Fund (WWF) there are between 5,000 and 5,400 black rhino. Black rhinos are the smaller of the two African rhino species and have a hooked upper lip to help them feed on leaves from bushes and trees.

Both of these black rhino conservation updates were donated by Sarah with funds were raised from sales of Rhino Tears Jewellery. Sarah visited Kariega in 2017 with her family and heard about the poaching of both black and white rhino for their horns. The family listened in horror as their field guide Daniel Haesslich told them the story of how rhino Thandi and two other male white rhinos had been brutally poached in March 2012. The rhinos were darted with a tranquilizer gun and their faces were hacked to remove their horns. Both males died and somehow Thandi survived. Her hard-fought recovery was supported by many specialists and donors from around the world. In 2015, Thandi miraculously gave birth to a female calf Thembi (meaning Hope) and has subsequently had a male calf, Colin. Thandi still bears the scars of the poaching and has no horns, a constant reminder of the suffering she endured.

In their various discussions on the safari vehicle and at meals, Daniel encouraged Sarah to act on her passion. After returning home to England, Sarah decided to make a silver tear in Thandi’s honour. She hoped that Thandi's story and the money raised from the sale of Rhino Tears Jewellery would make a difference to rhino conservation.

Sarah has become a huge supporter of the Kariega Foundation's Save the Rhino project. Donations to this fund support rhino conservation procedures including relocations, dehornings, fitting tracking collars and other activities to try to keep our rhinos as safe as possible. 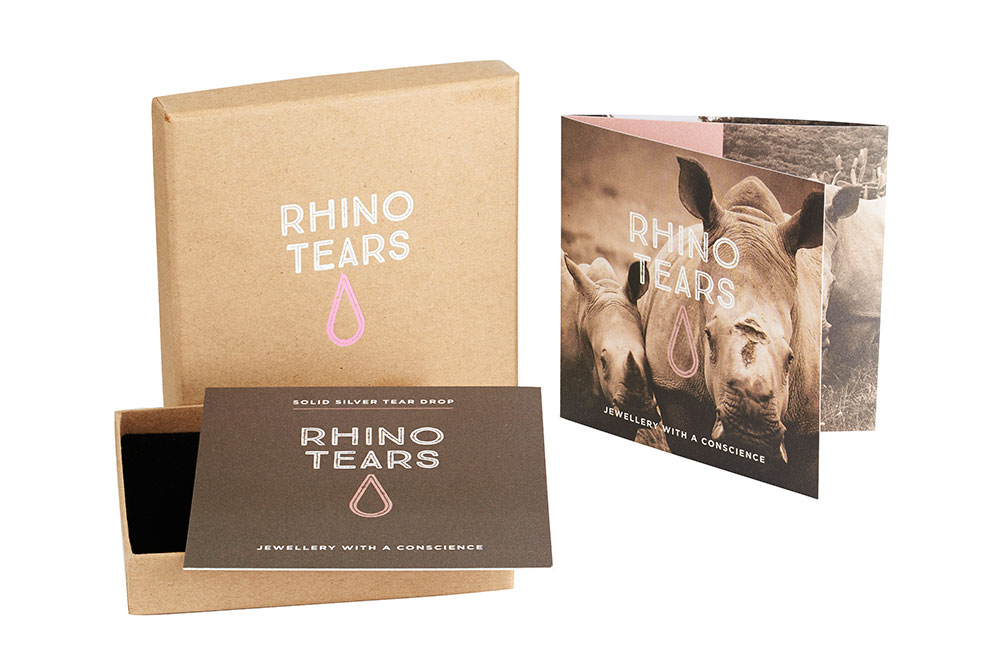 Black and white (or square lipped) rhino both have two horns that are made of keratin, the same substance as our hair and fingernails. Demand for these horns has resulted in rhino numbers plummeting in the latter part of the 20th century. Initially rhino were hunted for trophies during the European colonial era but now their main threat is from the illegal rhino horn trade between Africa and Asia.

Black rhino used to be the most numerous of all rhino species. In the early 1990's their numbers dipped below 2,500 and in 2004 only 2,410 black rhinos remained. Thanks to huge conservation efforts black rhino numbers have doubled to just over 5,000. However, the black rhino is still critically endangered and we need all the help that we can get to protect and conserve the small remaining population.

Over the last 10 years the poaching of rhino horns in South Africa has grown to epidemic proportions. More than 8,000 rhino have been killed by poachers who sell the horn to middle-men who pass it on to buyers in Vietnam and China. Rhino horn is also valued in North Africa and the Middle East as an ornamental dagger handle.

It is so difficult to comprehend the belief that animal products, including rhino horn, pangolin scales and lion bones, are able to cure ailments such as cancer, arthritis, migraines and even hangovers. Unsurprisingly, there is no scientific evidence to support the idea of rhino horn having medical properties. Thank you to Sarah and everyone who has purchased Rhino Tears Jewellery. As you can see, the funds raised through this business go directly to rhino conservation, and in this case to protect our black rhino.