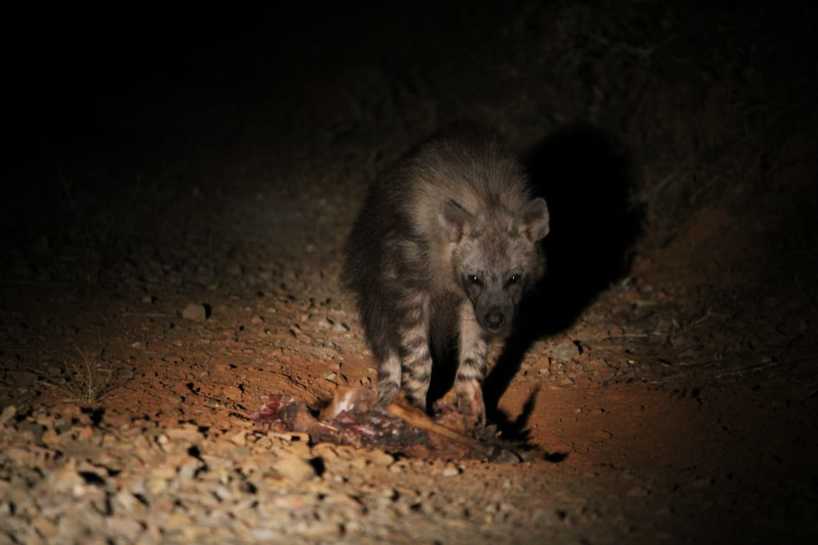 In this article our Kariega ecologist, Chris Reyneke, shares the details of a brown hyena research project which commenced at Kariega Game Reserve on 7 October 2019. The pilot project will run until mid 2020 in collaboration with the Rhodes University Zoology department and is overseen by Dr. Jessica Comleyas as part of her post PhD. Brown hyenas are one of the least studied large carnivores in southern Africa. Extended sightings of brown hyenas occur at Kariega Game Reserve, making it an excellent location for conservation research focussing on the genetic structure and diversity of brown hyenas.

Brown hyenas are predominantly nocturnal scavengers with a narrow distribution in southern Africa and are only found living in Botswana, Zimbabwe, Mozambique, Namibia, and South Africa. Although they have a life expectancy of 12 years in the wild and can be found in almost all types of habitats while scavenging and hunting from a wide variety of food sources, they have been listed as near threatened since 2005 with an estimated population of 5,070 - 8,000.

Estimates of population structure and relatedness among brown hyena individuals are difficult to establish because of their social organization and behaviour. Brown hyenas either live as members of a clan or nomadically. Small clans usually consist of a single female and her cubs while the larger clans consist of extended families, which usually include at least one female, her adult offspring of both sexes and an immigrant male. Females often live and breed within their natal clans for their entire lives; whereas males tend to leave their natal clans and either adopt a nomadic lifestyle or migrate to a new clan to have reproductive success.

The lack of information on the population structure of brown hyenas in South Africa makes them a very appropriate species to study. Elucidating the genetic structure and gene flow (e.g. relatedness of individuals within the reserve) of brown hyenas in the Eastern Cape could add to our limited understanding of the mating system and dispersal behaviour of these animals on enclosed reserves. 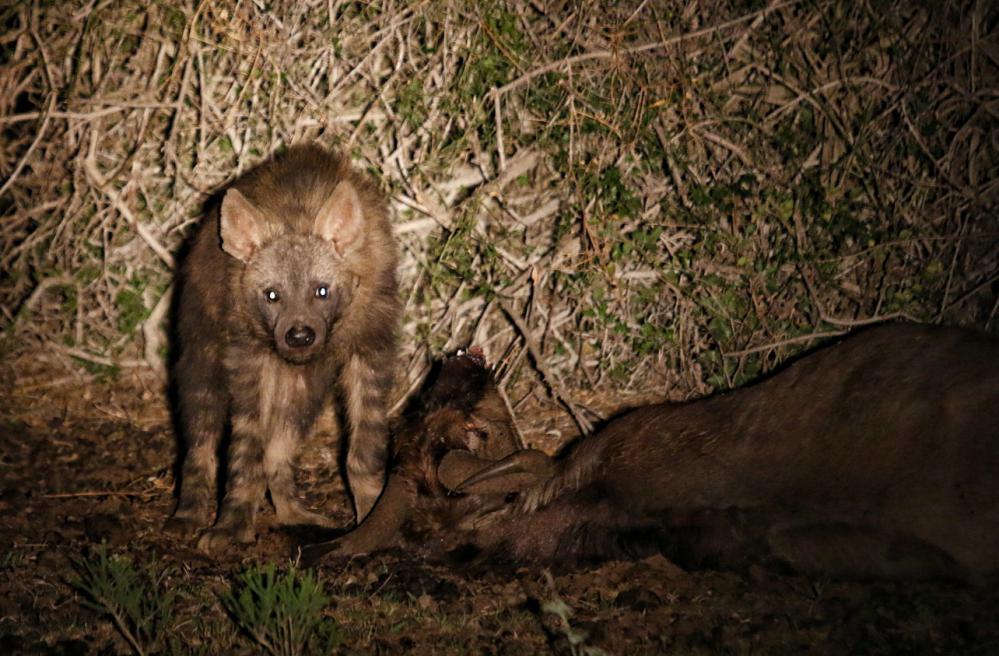 The overall aim of this brown hyena research project is to compare genetic data from both museum specimens (past) with data that we collect on the reserve (present), to determine if and to what degree that the enclosed reserves in the Eastern Cape (South Africa) impact on the genetic structure and diversity of brown hyenas. Genetic samples will be collected from scat and paste marking on the reserve and through the use of biopsy darts.

Museums are an important source of non-invasive biological samples for genetic studies and can help in comparing the past and present diversity of species. Only a small amount, skin and bone tissue is needed for a reliable source of genetic information. Scat samples contain epithelial cells from the intestine and mucus, from which DNA can be extracted and amplified using polymerase chain reaction (PCR). While the main challenge of using scat samples is obtaining good quality DNA. Brown hyena scats can be reliably identified from their size and shape. Brown hyena paste markings have been found to be a reliable source of DNA when less than seven days old. Brown hyena paste markings, which are usually deposited on grass stalks can be identified by the two distinct secretion colours (one white and one black) and the strong smell of the secretions.

As there has been such limited research done on brown hyenas, the methodology of collecting samples from live animals is restricted. The most common method of collecting fresh genetic data involves a highly invasive methods including darting, anesthetizing and handling the animals to collect blood and tissue samples. In this study we will use dropout biopsy darts to collect genetic data from the brown hyena individuals. This method will be evaluated and we hope will aid the development of future research projects that focus on large carnivore conservation genetics.

Tissue samples are routinely used by ecologists as a source of good quality and quantity of DNA to determine sex ratios, examine genetic diversity, population structure. To further determine the population density and dynamics, as well as the clan distribution of our brown hyena population a systematic system of camera traps have been set out to survey between 30 and 90 nights. Using identification profiles of individuals and a capture-recapture mathematical formula we would be able to get a very accurate estimate of our brown hyena population. South Africa might be known for its rich biodiversity, but unfortunately most of it is heavily threatened by human development. Over the past two centuries, wildlife populations, especially carnivores, have been on the wrong side of progress. Large carnivores are one of the groups most threatened with extinction due to habitat loss and fragmentation, accompanied by the fact that predators natural occur at much low densities than animals lower down the food chain. They also reach sexual maturity much later and are generally quite specialized makes them even more vulnerable and less likely to bounce back on their own.

Throughout most of Africa, large carnivores are restricted to reserves or conservation areas because of human-wildlife conflict, and even there they are still not safe from humans should they wander outside the protected area.

The majority of South Africa’s conservation areas are relatively small in comparison to the historical ranges of large carnivores and all of the areas are fenced. This means that it is difficult to naturally support viable populations of large carnivores. Although fences help to minimize human-wildlife conflict, they can alter social structures, habitat and food selection. The greatest long-term conservation threat for large predators, including brown hyena, is that living in isolation will result in a loss of genetic diversity. Any isolated populations will eventually experience inbreeding and a loss of genetic variation which leads to a lack of resilience to diseases. The African wild dog for instance, suffers from low genetic diversity and entire packs have been wiped out in the wild by canine distemper and rabies.

Even though enclosed reserves contribute to the conservation of large carnivores, such as brown hyenas, this contribution will be limited if species are managed in isolation and conservation genetics are overlooked. To prevent this, Kariega Game Reserve is conducting this brown hyena research to determine what our current populations inbreeding coefficient is, compare that with wild populations and monitor the change in genetic diversity over time to see if our conservation efforts for brown hyena are successful.

One way to address the negative effects on isolated wildlife populations is through a meta-population management strategy, which means that although populations are isolated they can be managed as one entity within a cluster of reserves by moving selected individuals between the protected areas. This have been successfully applied for the reintroduction and conservation of wild dogs and cheetahs over the past 30 years. However, to date no guidelines or meta-population management schemes exist for maintaining the natural genetic structure of brown hyena, which is a major conservation management challenge.

The majority of large carnivore research has focused on the reduction in population sizes and species’ distributions, whereas relatively few studies have explored losses in genetic diversity and associated conservation interventions. We invite you to share your opinions about this brown hyena research and conservation by leaving a comment below. You can add images, video and thoughts about your Kariega safari experiences with large carnivores by joining our communities on YouTube, Facebook, Instagram and Twitter. We also encourage you to subscribe to our blog so that you can receive updates and future articles via email.

If you would like to find out more about a safari at Kariega Game Reserve in South Africa please contact us on reservations@kariega.co.za, fill out our contact form or view more information about our five safari lodges.

Brown hyena photographs thanks to guides Amber and Wayne.