There are three species of zebra - the Burchell’s or plains zebra, the Grevy’s zebra and the mountain zebra. During your safari at Kariega Private Game Reserve in the Eastern Cape you will see herds of Burchell's zebra.

Amazingly zebra stripes are unique, are like human fingerprints, and can be used to identify individuals. All zebra have black skin covered with black and white hairs giving them their beautiful stripes.

A group of zebras is called a herd but a nicer description is a dazzle. This makes sense if you see them all standing together with stripes going everywhere and dazzling you with confusion. It also helps to distract predators such as lion when the zebra run. 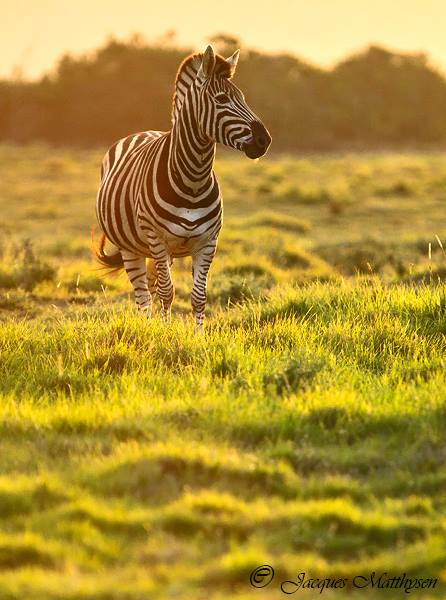 Zebras can live up to 30 years, depending on the number of predators, disease and fights with other zebras. They feed on short grass and will follow animals like wildebeest to eat the remaining short grass after the wildebeest are finished eating. Zebras are fussy drinkers and don’t like dirty water. They will move the top layer of water around to get rid of debris before drinking.

Zebras have great eyesight, hearing and sense of smell. If there are other species like monkeys, giraffe and wildebeest around they will feed in the same area as this helps then to detect predators and stay safe. There is definately safety in numbers in the Eastern Cape wilderness.

Follow the links below to see some other fantastic pictures of these photogenic animals at Kariega.

Did you manage to capture a photograph of a dazzle of zebra during your Eastern Cape safari at Kariega? We would love to see them You can share them with us by posting them onto our Kariega Facebook page.