The Eastern Cape summer months of December, January, February and March are characterised by endless days of sunshine. The Kariega Conservation Volunteers took advantage of the long summer days and worked hard at numerous projects on the reserve.

The Kariega volunteers carried out three game counts, one for each of the major sections of the reserve, namely Kariega West (KW), Kariega East (KE), and Harvestvale (HV). The process of game counting is one of the more challenging volunteer tasks as it requires a great deal of concentration. That being said the volunteers did an excellent job in carrying out this important task.

This project is a national citizen science project run by the animal demography unit (ADU) and it allows the Kariega volunteers to assist in the collection of bird occurrence data within Kariega Game Reserve. This project is an excellent educational tool and allows volunteers to become familiar with the wonderful variety of birdlife found on Kariega, while contributing to significant national data capture. Eight BIRP monitoring sessions were conducted (approximately 38 hours). Within these sessions, a variety of 97 different bird species have been encountered. This means that the volunteers have encountered 35% of the bird species which have historically been recorded on Kariega (280 species).

This volunteer project aims to collect data regarding the spatial movement patterns of rhinoceros on Kariega. This information assists in anti-poaching patrols and acts as a deterrent during high risk periods. The behaviour of the rhinos has also been recorded and the volunteers were taught how to observe the sexes of rhinos and record their observations into data sheets. Most significantly, it has provided Kariega volunteers the privilege of spending time with these magnificent animals in the wild.

Due to the high alert situation created by the poaching of three rhinos on our neighbouring Sibuya Game Reserve and two others near Grahamstown, the volunteer programme initiated an anti-poaching assistance duty. The volunteers have shown an intense desire to assist in ensuring the welfare of Kariega’s rhinos.

The volunteer programme aims to determine the home range size and movement patterns of the elephants on the reserve, as well as to record vegetation impacts and preferences of these mega herbivores. Throughout the quarter the volunteers have had approximately 36 elephant sightings ranging from individual animals to herds of 16 elephants. These encounters have been very popular with the volunteers as the animals have in many instances been so comfortable with the vehicle that they have approached and passed by the vehicle calmly. These magical experiences have left volunteers awestruck and amazed at the sheer size and beauty of the elephants.

The volunteer programme has agreed to assist in collecting data to assist Orla McEvoy with her PhD research. She is investigating the dilemma of managing lion populations on reserves and intends to draw up best practice guidelines suitable for the specific needs of reserves involved.
For many of the volunteers this has been their first encounter with lions in the wild. The data collected indicates that the lions have primarily killed warthog, followed by impala. It is however the view of the co-ordinator that this statistic reflects species abundance and prey availability more so than prey preference for lions. Lions have also been observed stalking elephant which has been very interesting to see.

The volunteer co-ordinator has done fortnightly presentations in the veld to teach the volunteers about animal spoor, tracking and how to respond when encountering dangerous game, either on foot or in a vehicle. Two long morning hikes have been carried out as well as several short hikes. Volunteers have also been taught how to navigate using the stars.

Night drives offer volunteers the opportunity to discover the different animal world which awakens as the sun sets. It is also a good chance to learn about ethical game viewing with a spotlight. Night drives have provided some great sightings of hippopotamus feeding on the grasslands and lions actively out on the prowl. Furthermore they have provided sightings of nocturnal animals such as springhare, bushpig and porcupine. Night drives remain an intriguing and popular experience among the volunteers.

The volunteer programme relocated the nursery to the workshop area. The volunteer programme has also collected seeds of plants such as Calodendrum capense (Cape chestnut) and obtained seeds of Acacia Tortilla (umbrella thorn), Fauderbia albida (ana tree), Kirkia accuminata (white seringa), acacia erioloba (camel thorn tree) to selectively grow in the new Ocean view nursery. Although many of these plants are not regionally specific, they are indigenous to South Africa, and can create lovely decorative trees which can be planted near lodges, offices and buildings as a decorative alternative to replace alien plants such as Pinus pinaster (cluster pine) and Eucalyptus camaldulensis (red gum) currently surrounding many buildings on Kariega.

Due to the fast growing nature of thicket vegetation, maintaining the accessibility of roads is vital. In some instances, elephants have have broken off branches and trees into the road; rendering them inaccessible. The volunteers have addressed such problems and continue to do this on an ongoing basis through road clearing. At river crossings where roads have degraded badly the volunteers have assisted in rock packing to repair the roads.

In order to ensure effective conservation of natural areas, it is imperative to look after and have good relations with the surrounding communities who will comprise the majority of the reserve human resources. Community outreach is carried out by the volunteer programme on a weekly basis, every Wednesday (depending on transport availability) and has become one of the most popular volunteer activities. 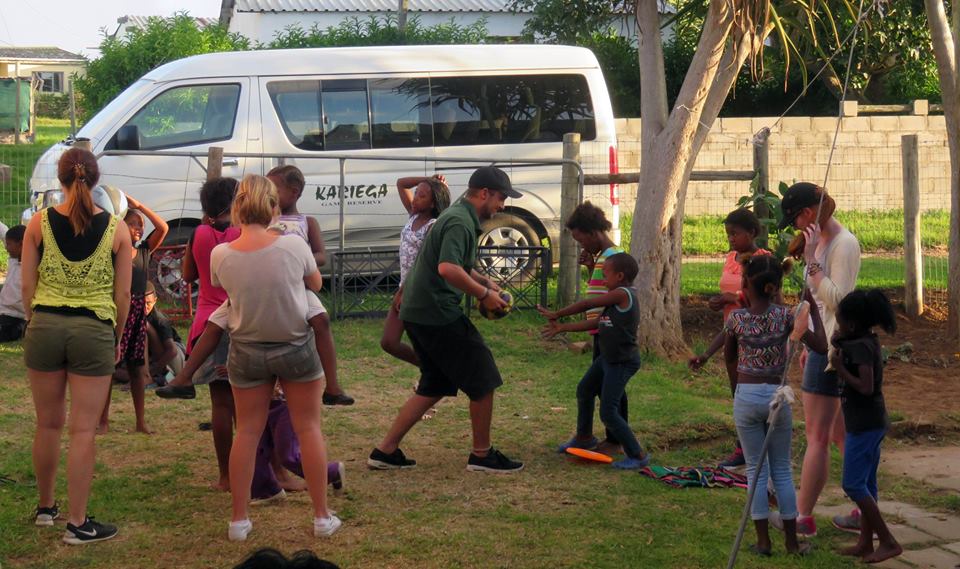 The volunteer programme assists at the Farmerfield school on a weekly basis alternating between one week of classroom assistance and one week of repairs, maintenance and improvement of the school's facilities.

During this term the volunteers have helped by planting six Erythrina caffra (coral trees) at the school to provide shade in years to come. The playground has been improved by repairing the broken swing and by carrying out litter sweeps to keep the school grounds tidy. Gutter measurements have also been taken as the Kariega Foundation intends on replacing the broken guttering system at the school.

If you would like to find out more about the Kariega Conservation Volunteer programme please email Helena Warren volunteer@kariega.co.za.

I've enjoyed my stay very much. Jarrett does a great job. I'll try to come back.
Kind regards,
Ursula

I absolutely loved my time at Kariega, even though it was a short stay. I really hope I can come back one day! Jarrett does a fantastic job, and makes it so easy to enjoy even the most gruelling tasks! Give the children lots of hugs from me :)
Amy x

Hello Amy and Ursula,
So glad that you had a great time on the Kariega Volunteer Programme. We so appreciate your help and contributions. We hope you can come and visit us again!
Kind regards from the Kariega team.