Its not just the humans around Kariega Game Reserve that are appreciating the warmer weather lately, the elephants are also taking full advantage of it and on a particularly hot day we found them splashing around in a muddy hole. The hole enlarged in size as more and more elephants tried to squeeze into it, until it became a good sized crater. A few elephants could fit in at a time, while the rest milled around some what impatiently waiting their turn. The usually dignified adults got right in amongst the babies and lay down on their sides, paddling their feet ecstatically, and causing mud to spray everywhere at the same time. Some even performing head stands as they dug their tusks into the ground and gorged lumps of mud out to throw onto their backs! What a wonderful opportunity to see the more playful and lighthearted side of life as an elephant. Mud serves all sorts of useful purposes, such as acting as sun screen, removing parasites and cooling the body temperature, but its easy to see that the elephants enjoy it recreationally as well.

Other good sightings included stumbling upon the lions shortly after making a wildebeest kill. Although the sighting of them feeding wasn't clear, as they had pulled the carcass under a bush and out of sight during the ensuing scuffle over it, just sitting nearby hearing their grunts and growls was an awesome experience. Not to mention how fearsome they looked when they finally emerged from the bushes with red muzzles and blood on their paws.
Its a forceful reminder of the ferocity of lions, which is easily forgotten when watching them lounge around in the sun on a usual lazy day.

We also practised our telemetry tracking on the pride after they had gone MIA for a few days. The volunteers had a brilliant display of how accurate the telemetry can be when we eventually found them deep in the bush and perfectly camouflaged in the pale, long grass. In fact if the telemetry hadn't been insistent that the lions were there we would of easily driven straight past them! Although the rangers rely mostly on physically tracking the lions for game drives, it is practical to have at least one lion radio collared should we need to find them for management purposes. It also helps the Kariega Volunteer Program find them to record kills far off the beaten track.

An unfortunate event took place when we found a dead impala which had broken its neck trying to jump through a fence. Accidents such as these happen from time to time when an animal is grazing close to a fence and is spooked by something and gets in a confused panic. However it did not go to waste and we promptly loaded it on the cruiser and strung it up in a tree with a trail camera pointed at it. This will make great leopard bait and the smell of its rotting flesh would attract attention for weeks. By putting it in a tree we make sure that it is not stolen by other scavengers such as jackal and bushpigs. It will also be interesting to see what other carnivores are attracted to the area. Let's hope that we get some good pictures... Watch this space!

Kariega East are in the process of letting the buffalo out of their enclosure and will be offering guided walks in the not too distant future.
Getting the reserve ready for this exciting new development includes removing all the self-guided trail markers. We went on a lovely trek through the bush collecting wooden arrows and removing all the nails along the way. Hiking is a wonderful way to appreciate some of the small critters, birds and vegetation that Kariega Game Reserve has to offer. It was also a great opportunity for the Kariega Volunteers to identify the different types of Fynbos that we had previously discussed. Fynbos is a South African biome which has an extremely high level of biodiversity and makes up part of the Cape Floral Kingdom, the smallest but richest of the six floral kingdoms of the world. 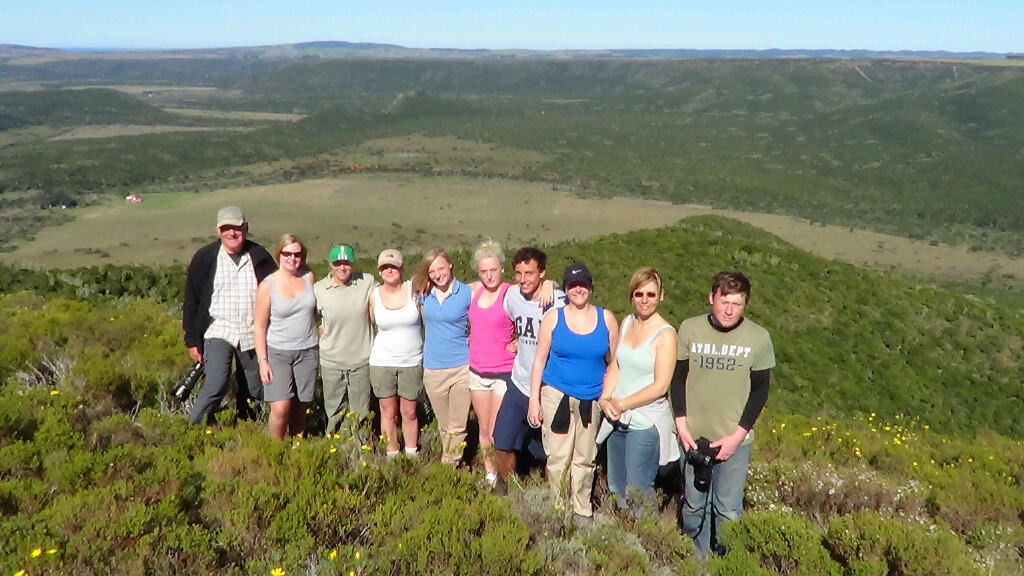 This month we trapped yet another porcupine digging up the general managers vegetable patch. We released it as far away from any households as possible and marked its quills with a red paint. Hopefully this will help us determine if it is the same porcupine returning each time or if there is a large population waiting to exploit the delicious treats found in the veggie garden.

Along with the great animals sightings experienced in August, we also performed the usual task of ridding the reserve of alien trees. Namely by ring barking pine trees and sawing down black wattles! This is always hard work but good fun. It is a satisfying feeling to look back over an area that you have cleared and immediately be able to see the impact that your hard work has made.

We also tackled the leaky water hole outside the Kariega Volunteer house for the second time this year, in order to get it ready for the hot summer which lies ahead of us. Past volunteers may recall this fun but extremely muddy exercise. First we have to empty the sludge and old plastic from the existing hole. We then re-lay new black builders plastic, covered with a thick layer of fresh clay. The next step is compacting the clay by stamping all over it, and then letting it dry to a hard crust. Finally the waterhole is ready to fill up again. All that is left to do is to hope that the layer of clay is thick enough to stop the warthogs from ripping up the plastic during their wallowing!! I have a good feeling about it, this time..

I hope to see more new faces here during September.
Have a safe journey,
Justine

Great newsletter Justine! Sounds like the volunteers had an amazing month!