Having successfully raised two sturdy (and loud-mouthed) chicks last summer, the Hadedas are back in the Coral tree preparing a new nest site. Further down in the same tree a pair of olive woodpeckers is rat-tat-tatting away, excavating a hole in a dead branch. Down the driveway the Clivias are in spectacular bloom, and the new lion cubs have been sighted and photographed at Kariega; all signs of burgeoning life and the end of winter. It is a joyous time of year, but also a reminder to be on the alert, for after their long winter rest the puffadders are about their business again, shiny in their new brown and gold outfits and searching in the nooks and crannies between the rocks for a possible meal. In contrast with the lightning speed with which they strike, their sinuous movements are slow and silent in order not to alarm their prey, but making it all too easy for the unsuspecting to tread on them, with possibly fatal results. Although potentially dangerous we admire the puffadders for their grace and ability to survive in difficult circumstances despite the continual harassment of mankind. Without them we would be overrun by indigenous four-striped mice and vlei-rats, not to mention the ubiquitous brown rat (Rattus norvegicus).

We seldom see either snakes or rats and mice in the vicinity of the house or in garden, and this may be due to the presence of our resident Cape grey mongoose. For much of the winter we were entertained by a family of these creatures, father, mother and briefly, two youngsters, but with the coming of the Spring the family has split up to go its separate ways, and only the father remains. He has over a period of many months come to accept me as a part of his territory. In general the Cape grey is unafraid of humans, but our male has come to realize that I am not only harmless, but also useful, in that my presence deters the local butcher bird from making dive-bombing attacks on him. So as a result while I drink my morning tea in the warm, spring sunshine, he takes the opportunity to soak up some sun while lying within a metre or two of my bench. Meanwhile the butcher bird keeps a jaundiced eye on us while perched on a branch over our heads.

The other day, having spent some time curled up in the shade in a nearby plant-pot, the mongoose decided that he would prefer to be in the sun, hopped up on the bench and spread himself out on the bench beside me. Fortunately Caryl was at hand to record the moment for the benefit of our grandchildren. 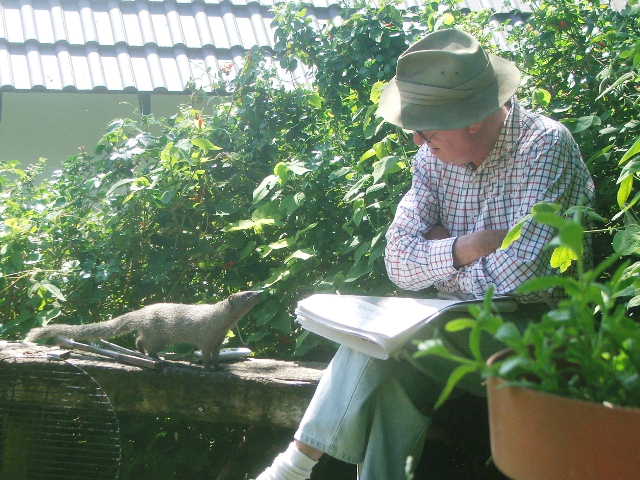 Wild animals are just that, and for their own sakes should never be fed or encouraged to indulge in unnatural behaviour. Feeding baboons and monkeys, for example, is as good as signing their death-warrants, for they become used to the hand-outs and in next to no time are making a thorough nuisance of themselves; behaviour that results in their having to be shot.

For one’s own safety too it is also necessary to stick to this rule. All mammals can carry rabies, a viral disease that causes inflammation of the brain. In certain stages it causes animals to behave unnaturally and to lose all fear of humans. The virus is carried in the animal’s saliva and a bite is sufficient to pass it on. Symptoms first appear after two to 12 weeks, but unless post exposure prophylaxis is administered as soon as possible after the bite, the disease is regarded as incurable in humans, resulting in a painful and ghastly death. So, despite their reputation for fearlessness, and his own apparent acceptance of my company, I treat my mongoose friend with circumspection – a glimpse of his needle-sharp teeth when he yawns is reminder enough - but I must confess that I have become really rather fond of him.