This video is about the elephant who lost his tusk at Kariega Big 5 Game Reserve in South Africa's Eastern Cape. Senior guide Brendon Jennings answers some fun questions interspersed with some beautiful footage of the largest bull elephant living in the wild at Kariega taken by wildlife filmmaker Fergus Clark.

Along with the lighthearted facts, Kariega's ecologist Chris Reynecke provides some background about this African elephant and some interesting details about the factors that may have contributed to the bull loosing his tusk. Due to his size and age this elephant is referred to affectionately as "Madoda Indlovu" (isiXhosa words meaning male elephant) or "Big Bull" by the Kariega safari guides.

African savanna elephant (Loxodonta africana) are the largest and heaviest land animal. Big Bull has a shoulder height of approximately three metres (10 ft) and weighs around five tons. He spends most of his time alone and is usually seen feeding on grass, leaves and bark.

Background on the Elephant Who Lost His Tusk

Big Bull was born at the nearby Addo Elephant National Park in South Africa's malaria-free Eastern Cape region. As the name suggests, the park is a stronghold for elephant conservation in southern Africa. Two bull elephants were relocated to Kariega Game Reserve in 2004. Both were estimated to be in their mid to late 30’s. These two bulls joined a breeding herd who were brought to the reserve to reestablish elephant in area in the same year.

The main reasons for the introduction of the two bulls was to ensure that there were older males for breeding and to mentor younger bulls. The introduction of mentoring age bulls is a standard conservation practice when establishing new elephant populations. According to the World Wildlife Fund there are only 415,000 African elephants left in the wild, and the species is classified as vulnerable to extinction. Why Did the Elephant Loose His Tusk?

There are likely to be combination of factors that caused Big Bull to loose his tusk.

Big Bull is now in his mid-50’s and his age is definitely is a key factor as to why he lost his tusk. African elephants in the wild live to approximately 60 years old and elephant bulls generally have a shorter lifespans than cows.

Another biological factor is his tusk preference. Elephants are similar to humans in that they also have a preferred tusk, also called a master tusk. Big Bull is “right tusked” which means that he preferred to use his right tusk as a tool to dig out roots, break branches, fight etc. We know this from observing Big Bull in the past and also because the tip of his right tusk is significantly more worn than the tip of the left tusk. We would have expected that he may have lost this master tusk but instead he has lost his left tusk.

The way that this tusk is curved and its size would have placed a lot more stress on the rooted part of the tusk when used as a fulcrum (lever) as was most likely the case when the tusk broke off within the tusk cavity. 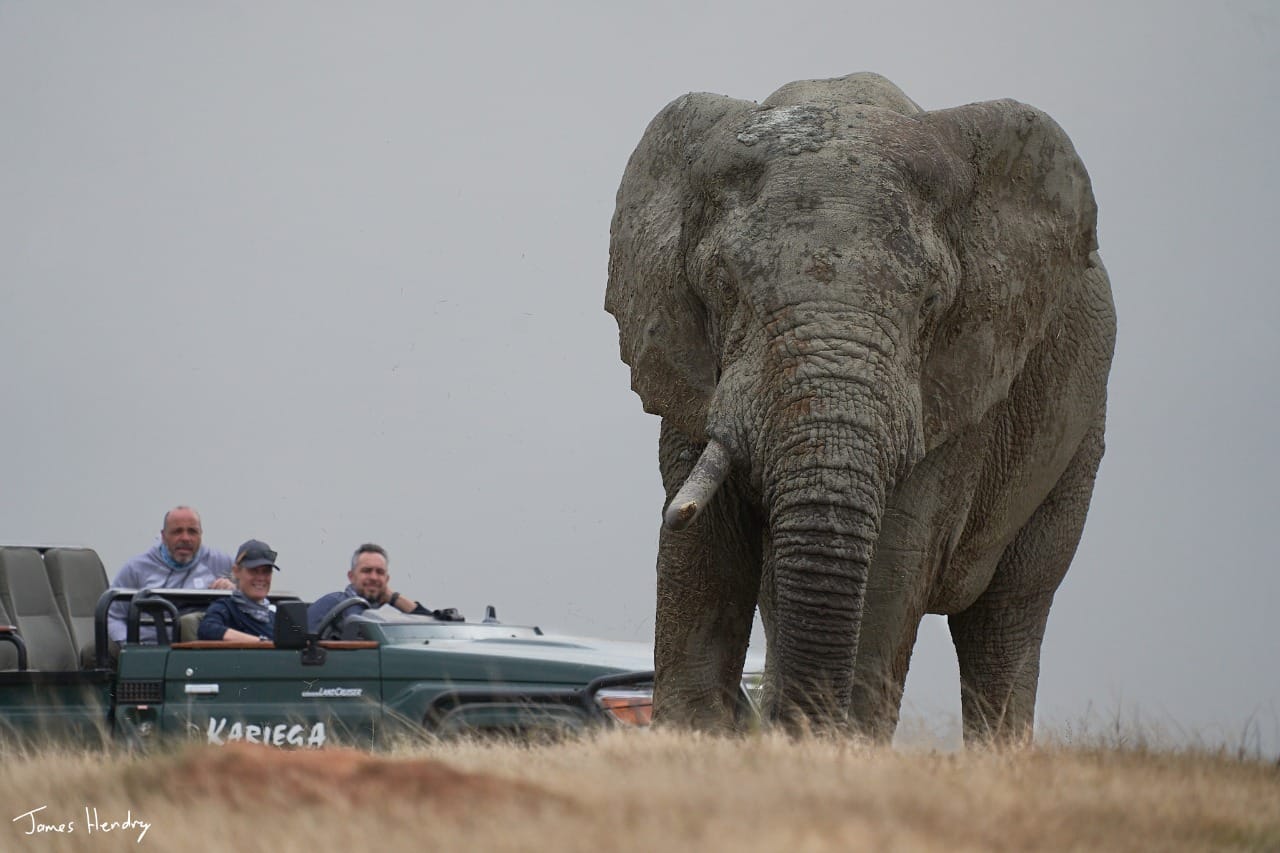 The terrain within the river thicket at Kariega Game Reserve is extremely demanding for elephants to move in. Big Bull spends at least half of his time in areas with steep valleys, thick bush and often very loose soils. Should an elephant of six tons slip, it is very plausible that his tusk may hit a rock or tree and break off.

The area where the tusk was found is actually just above such a valley. African elephants are known to carry the tusk and bones of other elephants around. This is also how senior guide Brendon found the tusk - he saw it when a younger bull was playing with it!

Another reason could be an infection. However, we did not observe any signs of infection or an abscess. The bull's behaviour also did not change and usually elephants that loose a tusk become quite agitated and aggressive if they have a permanent toothache. This suggests that the root of the tusk might already have been fairly loose.

Big Bull also wasn’t seen fighting with any bulls the night before and he was still alone the next morning when the guides found him without the tusk, so fighting can defiantly been ruled out.

In most likelihood, the reason that Big Bull lost his tusk it is a combination of a number of the above factors.

If you would like to see more images and videos of Big Bull, the many other elephant and wildlife who roam free at Kariega Game Reserve connect with us on Facebook, Instagram, Twitter and YouTube. You can also subscribe to our blog to keep up to date with news from the reserve.

If you have been to Kariega Game Reserve and had taken photos and videos of elephant and other animals, please share them with us on social media. If you would like to find out more about booking a safari at Kariega please contact us or find out more about rates and availability.