Mention the word “snake” at any social gathering in South Africa and you will have a topic of conversation to which all the men and a goodly proportion of the women will be able to make a contribution. It would seem from what one hears that South African men in particular are constantly coming across these reptiles in their daily lives. This surprises me. I spend a good deal of time tramping the veld and driving the back roads, but it seems that I come across fewer snakes than those whose homes and workplaces are in the centre of cities. Are snakes like so many other country-dwellers forsaking the boundless plains for the city? It would seem so, for recently I have been told about snakes in washing-machines and the engine compartments of cars parked in shopping-mall car-parks. The nearest any of these snakes came to being in the countryside was a cobra that, according to a newspaper report, brought a cricket match to a standstill when it made an unexpected appearance on the pitch somewhere in KwaZulu-Natal. (One of the batsmen, having regained his composure, dealt the no doubt bewildered creature a blow to the head which enabled the game to continue.)

Ever since Eve encountered the serpent in the Garden of Eden, man seems to have had a complex about snakes. To most there is no such thing as a harmless snake: if a creature slides on its belly it must be put to death, by stoning if no other weapon is handy, or even burning if it should take refuge in a bush. Every year numerous veld-fires are started by people attempting to deal with snakes sheltering in the undergrowth, so presumably not all snakes are leaving for urban centres. My fears on this score were finally laid to rest after reading a report by herpetologist Richard Boycott on a collecting trip he made to the Kouga and Baviaanskloof Mountains. On a stretch of track two or three kilometres long he found no less than six snakes, and later came across a group of workers in “tumultuous action (that) consisted of shouts, screams and flailing arms.” Stones were being gathered and “hurled at the earth.” Quite rightly he presumed that a snake was the cause of the uproar and arriving on the scene identified the corpse as that of a whip snake, Psammophis notostictus. He was fortunately able to rescue another whip snake from the furious mob. While whip snakes are mildly venomous, they pose no real threat to life nor limb, and when disturbed usually move with lightning speed towards the nearest cover.

Not being herpetologists Caryl and I do not go out of our way to look for snakes, and have never come near to finding as many in a day as Richard Boycott, but one we literally stumbled across was a skaapsteker, Psammophylax sp. The poor fellow was in the midst of a meal, swallowing what appeared to be a large vlei-rat, and was in no position to be able to get out of our way. Like whip snakes, skaapstekers are only mildly venomous and depend upon their speed to escape predators, or clumsy and possibly ill-intentioned humans. The common name skaapsteker is Afrikaans for “sheep stinger” or perhaps “sheep killer”. This is a singularly inappropriate name, for no skaapsteker could possibly kill a sheep or even a new-born lamb. The name may have arisen as a result of incorrect identification. Skaapstekers are common in areas frequented by the far more venomous Cape cobra – Naja nivea – which would certainly be capable of killing a full grown sheep. Cape cobras not only have a nervous disposition, but bite readily. However even they, although they will put on a terrifying display of hood-spreading and striking (to which I can personally testify) far prefer to flee than to seek confrontation. 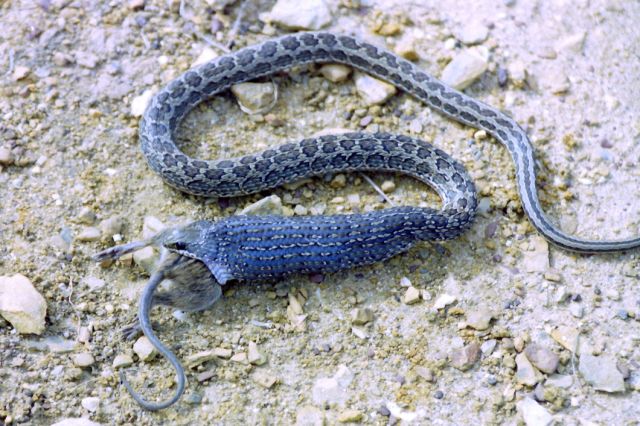 The skaapsteker kept a wary eye on us while finishing its meal. We watched with interest as the rat gradually disappeared. The last few millimeters of tail having been ingested, the bloated skaapsteker made off – not quite as quickly as would normally be the case – into the grass beside the road, where it disappeared from sight, giving us very little to talk about at the next cocktail party.