Kingfishers belong to a family of small to medium-sized colourful birds. They are widely distributed but most species are found in the tropical regions of Africa, Asia, and Oceania. Brendon has included his beautiful images of the six species of South Africa's brilliantly coloured kingfishers that are found at Kariega, along with interesting information about each bird.

The first image (above) is of an African pygmy kingfisher eating a bubbling kassina (frog). The pygmy kingfisher is the smallest of the species seen at Kariega Game Reserve. It is an intra-African summer migrant that visits our area between September and March each year. The smaller size and violet wash on the ear coverts distinguish it from the very similar malachite kingfisher (below). African pygmy kingfishers nest in burrows that are dug by both sexes in sandy banks or into a ground termite nest. They dig with their bills and then, using the bill and wings as props, kick dirt out with their feet. The females lay three to six white eggs. Both parents incubate the eggs and care for the young chicks.

African pygmy kingfishers are one of the many South African kingfishers that don't fish or include fish in their diets, contrary to what their name suggests. They are insectivores and eat insects and invertebrates including grasshoppers, spiders, worms, crickets, cockroaches and other flying insects. As seen in the image, they also eat small frogs. 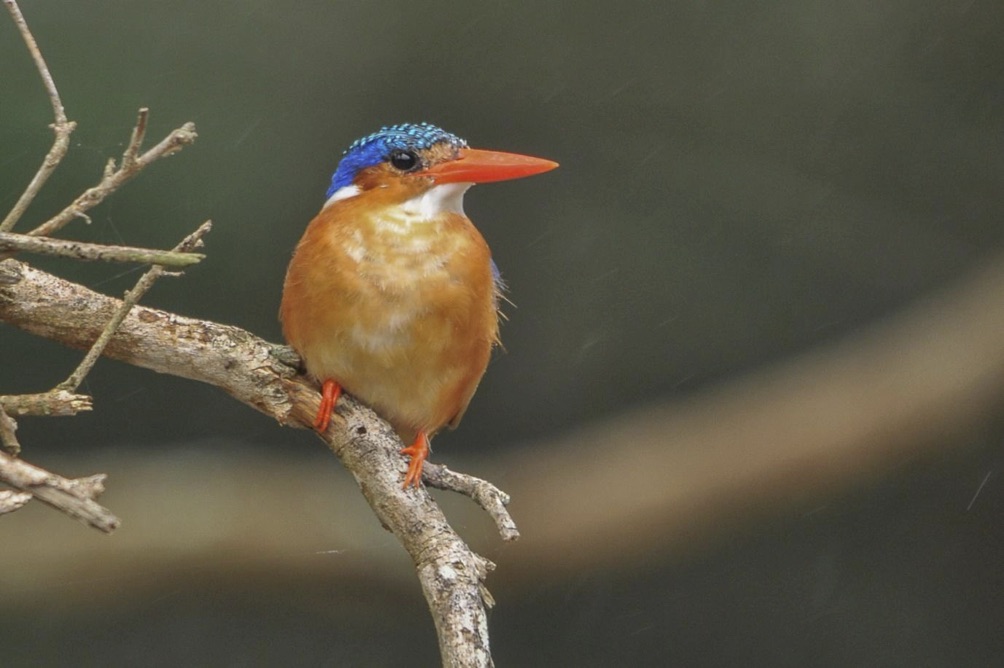 The malachite kingfisher is a common resident and regularly seen near water at Kariega Game Reserve. They can most often be found in reeds near slow-moving water or ponds. This species of kingfisher is good at fishing and mostly eats fish. The birds have favourite fishing spots, usually on a small branch over water. Malachite kingfishers are very efficient at catching their prey and drop incredibly fast from their branch into the water. They often return to their perch to swallow small fish and insects. The birds can also beat larger food items on the branch until they are dead and then swallow them whole!

If you look closely at the image above you will see that the kingfisher's second and third toes are fused together. This is called syndactyl feet and it occurs only in kingfishers and hornbills.

Malachite kingfishers also nest near water, usually making a tunnel in a sandy river bank. Like pygmy kingfishers, both birds excavate the burrow and it includes a nesting chamber at the end. Females lay three to six eggs and both parents also sit on them until they hatch. The half-collared kingfisher is usually found along fast-flowing streams with clear water and well-wooded banks. It is classified as uncommon, however, Kariega in the Eastern Cape of South Africa is home to a large population of these beautiful and brightly coloured birds.

This kingfisher hunts for fish, crabs, shrimp and other aquatic animals in the water and it also eats insects including butterflies, bees, wasps, locusts and ants. It is efficient at catching the small invertebrates in the air.

The half-collared kingfisher is a monogamous bird which means that it finds and breeds with one partner for the rest of its life. The pied kingfisher is estimated to be one of the three most numerous kingfishers in the world. It is not colourful like many other kingfishers but has distinctive black and white plumage and a crest. These birds are mostly found near water, including coastal regions where they can be observed in gullies and above breaking waves.

Unlike other kingfishers, the pied kingfisher does not perch but rather hovers at about five meters above water before diving for its prey. They feed mainly on fish, although they will eat crustaceans and large aquatic insects.

Pied kingfishers also have interesting breeding habits and can sometimes be found nesting together in groups. This co-operative breeding involves young non-breeding birds from an earlier brood assisting parents or even unrelated older birds. The breeding season is from February to April. Most other kingfishers are monogamous. 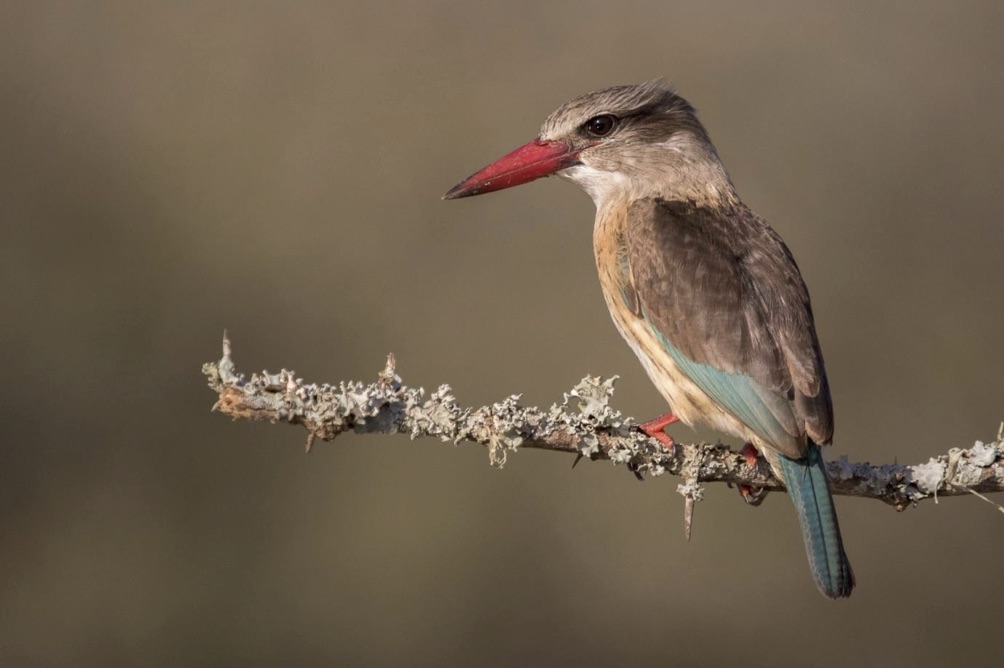 The brown-hooded kingfisher are found at Kariega in woodlands, grasslands with trees, scrubland and on the edge of forests. They can sometimes also be seen on the Bushmans and Kariega rivers and near waterholes.

This kingfisher feeds on insects, arachnids and small vertebrates. They can often be seen foraging on the ground to find food including insects, scorpions, reptiles and even small birds. Eating snakes and lizards as long as 25 cm has been reported! Most brown-hooded kingfishers do not migrate like other insectivorous kingfishers, but there is evidence of seasonal movements in some areas. The giant kingfisher is the largest kingfisher found in South Africa. The male has a red “shirt” as depicted in the above image, while the female has a red “skirt”. The birds feed mainly on fish but their diet can also include crabs, frogs and small reptiles. They usually hunt from perches but will occasionally hover for brief periods.

The giant kingfisher is monogamous and the pair build a very large the nest, or rather tunnel. The tunnel can be over 15 centimetres wide at the entrance and is typically two meters in length but a tunnel of eight meters has been recorded!

When you next visit Kariega keep a look out for colourful kingfishers and see how many species you can spot. They are sure to brightening up your day with their vivid colours and interesting habits.