We received this message from Dr Fowlds this morning. Although it is sad news, we are still positive about Thandi's health and recovery and are sure that her resilience and fighting spirit will prevail. A massive thank you to Dr Fowlds for all your amazing work for Thandi, and all the very hard decisions you have had to make throughout the recovery period. We have no doubt that she could not be in better hands. Thank you too to the surgical doctors, Drs Johan Marias and Alistair Lamont, who flew up from Gauteng without charge to check on Thandi, as well as to Idexx who will be doing Thandi's blood tests. On the bright side, we will be holding thumbs that blood results will reveal she is pregnant!

"The Kariega team once again gathered as we have done so often to attend to Thandi. The previous treatment was over 3 months ago and during that time we have witnessed her getting on with life in ways which seem so normal to rhino. Some of these moments have been captured on film and while she went about her rhino ways, her endearing story was shared with the world over the World Rhino Day weekend via Sky News in a profile of the deepening global rhino crisis. If only she knew what an impact she is having on people all over the world.

Reports and pictures from the rangers leading up to this day have indicated that she has rubbed her face to some extent and the tissues over where her front horn used to be may have been traumatised again in the process. So we started a little apprehensive about what we would find under the scab and muddy debris that had accumulated on her face. We found her walking with the cow and calf she spends most of her time with and the darting went smoothly with her ending up lying in the middle of a beautiful plain in the river valley. Her resilience to repeated anaesthetics was once again remarkable as she appeared to tolerate everything so well and all of her parameters were stable throughout. Blood samples from todays procedures will once again be analysed by Idexx in Cape Town as the best way to ensure that her vital organs are not suffering in any way from the amount of procedures she has had. 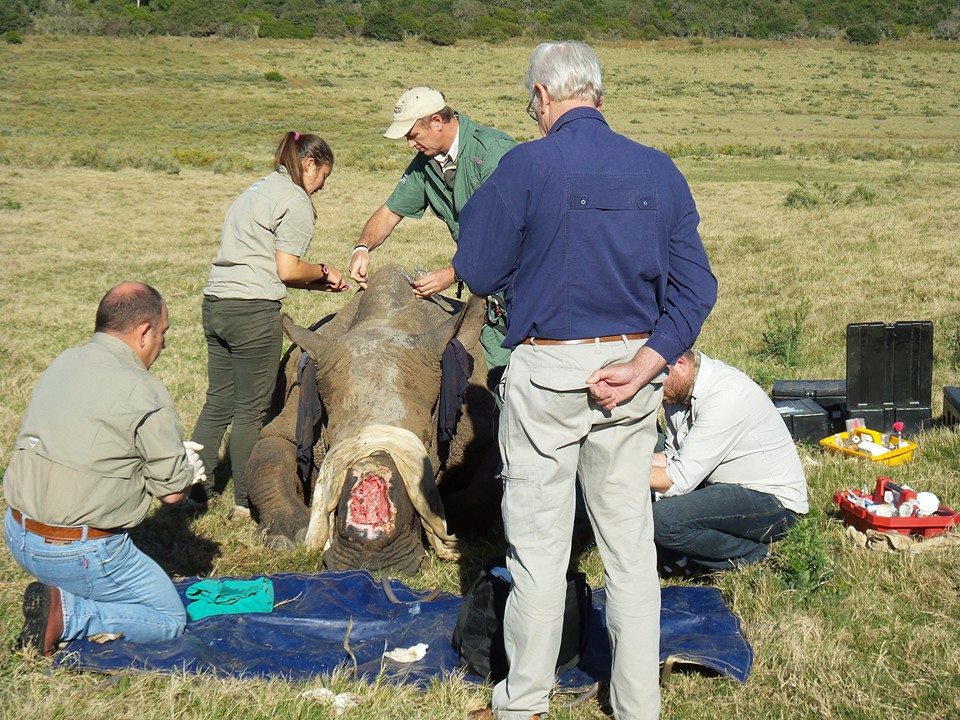 The surgical team consisting of Drs Johan Marias and Alistair Lamont assessed her face after a good clean up and we were all very disappointed to find that she has removed most of the grafted tissues that were transplanted on the previous two occasions. Only 2 small islands of tissue remain over her front horn area and the exposed bed of granulation tissue is not as blood rich as we would have hoped. The back horn area is doing well but probably isn't subjected to as much pressure as what is clearly happening in the front. It is not clear whether she is interacting with the bull, as no-one has witnessed any face to face contact with him, or if its simply her rubbing and rolling in the mud which is causing the problems. However, it should be remembered that she is in her position due to poaching and that the procedures we have tried were a first of their kind. Nature carries for more force than possible human intervention – no matter how good our intentions to help this amazing rhino.

The bottom line is that it is quite apparent that without some sort of hard protective covering, the fragile tissues are not being given enough time to establish themselves and strengthen. So we had to make the difficult decision of whether to continue with modified attempts to get good tissue to grow on her face or the step back from the supportive process and give her time to show us the way forward without interference for a while at least. After considering a number of factors including the possibility that she may also be in the early stages of pregnancy, we decided to leave her for now. It may well be that nature and her own resilience will need to give her a long term solution and that she may have to remain accustomed to living with her disability and the ongoing consequences thereof. So after giving her supportive treatments and cleaning her face we woke her up. She stood up, walked in our direction, gave a few snorts and calmly turned and walked slowly over the rise and out of site in the direction of her two companions.

A disappointing day after so many positive indications of progress. We now hold our breaths for news of a blood test which should tell us if she is pregnant or not."

god bless all of you,i will and do pray for her..

Thanks to Dr Fowlds and everybody caring for her. Love her very much and so glad she is ok

Hello...
I worked at a rserve where we had a young bull rhino whose horn was cut to low and developed a massive abscess which nearly rotted his whole face... after trying many things we made a giant pile of diatomised earth for him which he would come straight to and dab the wound on... he showed an amazing recovery and i would recommend trying this too ;)

I feel sure that pioneering plastic surgeon Dr Des Fernandes & Dr Matthias Aust have a solution for this. It includes Vitamin A therapy and skin needling. Could you needle a rhino? This procedure actually causes new skin to grow and has proven invaluable in repairing scars.

No matter what the results, and yes disappointing, it is just so awesome to know that she is living as normal a life as possible and I hope that her blood tests come back positive and she is pregnant.
Thanks to everyone concerned who have been with her every step of the way, she is who, what and where she is today and your constant love and hands on treatment can only benefit her.
Best of luck for the future Thandi and I shall be following your progress as I have from the very beginning.
Go Girl <3

let's all hold thumbs hoping that Thandi will move forward and that her beautiful will heal. The doctors working on her are amazing

Darn - hated to read this. The Team has done the best they could at this time. Letting nature heal the wounds may be the best course at this time without endangering her further. A baby in the future? May that give her the strength to carry on.

You did and continue to do ALL one can possibly do- thank you so much for that! We do hope she will survive and be mother! If this "natural-healing-phase" won't work, wont heal her - can she be saved by restraining her and "bandage" her ,but then locked in a safe place for a while?

As a South African living in Mexico I wait with bated breath for news of our beautiful Thandi!Good and not so good news but I am sure that this beautiful strong girl will prevail in the way she has shown us before and with all our love and prayers she will be with us for a long time to come.
Your love and dedication is amazing and I thank you for all you do for her!

Thank you so much for all the hardwork and dedication you have for these amazing animals! I am so inspired & moved by the compassion you and your team convey. Thank you so much!!! I wish you all great blessings and pray you can save more and more of them!!

Just saw her yesterday thanks again to Juan who has gone the extra mile every day with us to make sure we see it all! The story of Thandie breaks my heart and truly I would like to see her succeed and that in someway we can prevent this from happening again. Always here for whatever support is needed. Just let me know. Michelle and Sean (October 2013 - Irish Honeymoon couple!!) xox

It is so good to see how many people care for our precious animals on this continent. The sadness is that there are vicious people out there that destroy everything in a blink of a second. May God bless you all for doing such wonderful work!!!!!!!!!!!!!!!
Love you all

Thanks to Dr Fowlds and everybody caring for her. Love her very much and so glad she is ok

Angels - each and every one of YOU x