Giraffe research in the Eastern Cape including Kariega Game Reserve 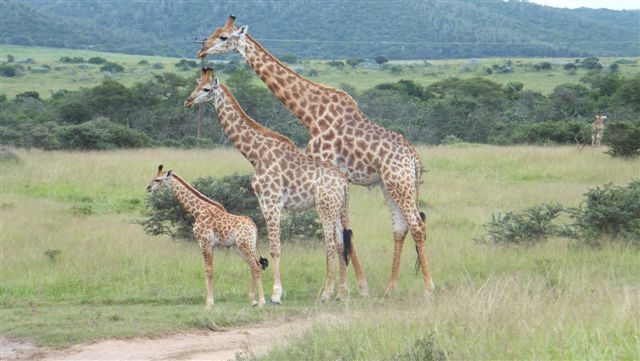 The diet and ecological role of giraffe (Giraffa camelopardalis) introduced to the Eastern Cape, South Africa

With an increase in the popularity of wildlife ranching in southern Africa has come the introduction of non-native (extralimital) mammalian herbivores.

Financial gain has arguably been at the forefront of these introductions, with little or no assessment of the ecological consequences. The diet of three populations of introduced giraffe Giraffa camelopardalis was assessed by direct observation in the Eastern Cape Province, South Africa between January 2002 and October 2003, as the first step towards understanding the ecological role played by giraffe in the region. Similar to the diet of giraffe within their native range, a deciduous species from the genus Acacia (Acacia karroo) was the most important species in the diet. Giraffe in the Eastern Cape Province, however, consumed more evergreen species than those within their native range. The relative lack of deciduous species in the Eastern Cape Province provides a probable explanation for such a result.

Seasonal variation in the consumption of the most important species in the diet was evident with members of the genus Rhus being more important in the winter months. This was attributed to the deciduous nature of A. karroo. The potential for giraffe to have a detrimental effect on the indigenous vegetation is discussed. We conclude that the study provides a much-needed list of plant species threatened by giraffe browsing in a region where the vegetation is thought to have evolved in the absence of such a browser.