Two items on the same page in a recent newspaper caught my eye. The first dealt with rhino poaching. In this a conservationist bemoaned the fact that a great deal of the money given by well-meaning members of the public to combat the poaching of rhino, and to assist the animals that survived, never reached those whose task it was to fight the scourge. He was quoted as saying that while he did not wish to discourage people from making donations, the contributions of those able to give of their time and expertise were possibly more valuable. He urged as many as possible to become involved in the fight, and not merely to write out cheques.

My interest in the conservationist’s plea was raised, of course by the fact that it was only a few weeks ago that we were all shocked by the rhino poaching saga at Kariega, and were following the progress of Thandi and the dedicated work done by Dr William Fowlds and the support team. Nothing can detract from the wonderful work done by Dr Fowlds, but without the help of all those who were willing to roll up their sleeves and give of themselves, he might not have been able to save Thandi. In any undertaking the work of the leader is of vital importance, but without those willing to fill the ranks, to do the work that receives little if any publicity, the cause may well be lost. So yes, the work of volunteers is vitally important, but for many of us, apart from bringing the attention of our friends and acquaintances to the slaughter, the only way we can be of help is by giving money.

The other item was a letter to the editor headed: ‘Pothole Bonus’. In this the writer, a farmer from Gauteng, noted how, as a result of the deterioration of the road past his farm, cars were travelling far more slowly than was once the case. It was now months, he stated, since he last came across a road-kill, whereas in years gone by, when the road was in good condition, he couldn’t drive to town without coming across squashed remains. In addition recent visitors to his bed and breakfast had commented on the display of autumn wildflowers, something that rarely happened in the past, surely because previously they were driving too fast to notice them.

During a recent trip through the Karoo we came across frequent road-kills and along a stretch of road near Murraysburg the pathetic remains of bat-eared foxes and a number of owls. Although owls frequent roads at night and bat-eared foxes are largely nocturnal, we have never before come across the corpses of so many of these two creatures along a relatively short – about 30 km – stretch of road. Both bat-eared foxes and owls happen to be particular favourites of mine, so I was most upset to come across their poor, bedraggled remains. Why is it that we are always in so much of a hurry? We condemn those that hack the horns from rhinos for gain, but blithely travel at speed along country roads, in the process decimating the local wild creatures. Here surely is one area where we all, with very little effort and at no monetary cost to ourselves can make a difference: we won’t make headline news by driving slowly and carefully at night, but we will make a contribution towards the preservation of biodiversity. We may even come across something of note, like the bush-pig family we once encountered going about their business on a dirt road not far from Kariega, and on another road a large porcupine swaggering down the centre of the road like a visiting government dignitary and as if he owned it, which in a sense he did. Waiting for this prickly fellow to move on, I was reminded of the lines written by that original hippie, WH Davies*:

What is this life if, full of care,
We have no time to stand and stare?

Small things can make a huge difference. Perhaps thirty years ago someone noticed that big leopard (or mountain) tortoises were being killed on the railway line near Bluecliff Station on the Port Elizabeth-Cradock line. The tortoises attempted to cross the line at a particular spot, but were often trapped between the rails and killed by passing trains. This was brought to the attention of the railway authorities and the engineers devised an escape route. The gap between two sleepers was increased slightly and the ballast (stones) removed. The tortoises walking down the line fell between the sleepers and escaped. The cost to the railways was next to nothing and the fact that tortoises are still to be found in the area is testimony to the efficacy of the solution.

A little less haste and a bit more thought will not only help save our wildlife, but might even brighten our lives a little. But if you find it impossible to slow down or to think of other creatures, just double the size of your next cheque, or electronic transfer. 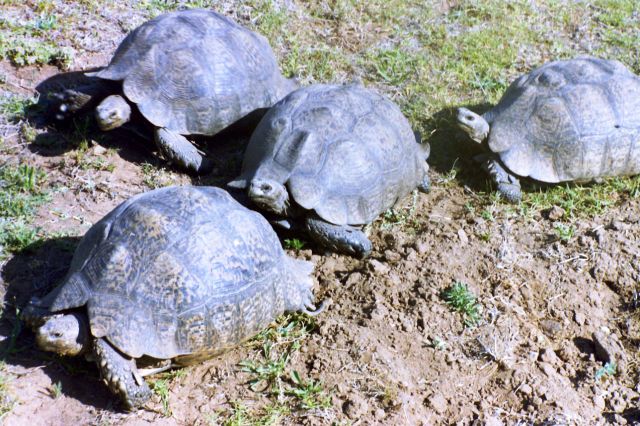 *William Henry Davies 1871-1940. Poet, author (‘Autobiography of a Super-tramp’) and vagrant both in England and America.

Very true! I often think the smaller changes individuals can make would in a sum make a much bigger contribution than donations or similar. Lets hope it takes hold and people start to slow down! More potholes is what we need :)

Thank you for bringing to light the problem of disappearing anti-poaching donations. I have wondered for some time where it all goes. Seems to me that with every new organisation comes the feeling that the hole for donations just keeps getting bigger and deeper and less likely that smaller donations make any difference at all. Does there not seem to be a need for some centralised, nationwide account and control body in this regard? Awareness campaigns are all well and good, but surely we are past the need for these now, and more in need of action campaigns? When are Game reserves going to start utilising their oh-so-numerous supporters for patrolling, or radio-manning, or something practical and useful? These days, with money not going as far as it used to, there must be many, many people who can only give of their time.