This photo of two red hartebeest in the flowers was taken by guest Graham Harvey. We love how it captures an intimate moment between these two gawky-looking antelope with their beautiful reddish-brown coats and black markings. You can also clearly see their long narrow faces, goat-like eyes and curved ringed horns. The angle of the antelope on the right shows a heart-shaped curve between its horns. This is thought to have explain the origin of the name hartebeest. However, a more widely accepted theory is that their name comes from the Dutch word "hert", meaning deer, and "beest", meaning beast.

There are estimated to be only 130,000 animals in this sub-species living in the wild in Namibia, Botswana and South Africa. It is difficult to tell the difference between males and females, except that males are slightly larger and their horns are longer. Females usually weigh up to 120 kg (265 lbs) and the average weight of a male is about 150 kg (330 lbs). They are a relatively large antelope with an average shoulder height of 1.35 meters (4.43 feet). This is smaller than the eland (1.8m or 5.9 feet), kudu, wildebeest and zebra (1.5m or 4.92 feet). The horns of a hartebeest can reach up to 60 cm (23.5 inches) long.

The gestation period of the red hartebeest is around eight months. Mothers give birth to a single calf. Calving usually takes place between October and December. After giving birth, the mothers usually keep their calves hidden in the bush to try to protect them from predators. 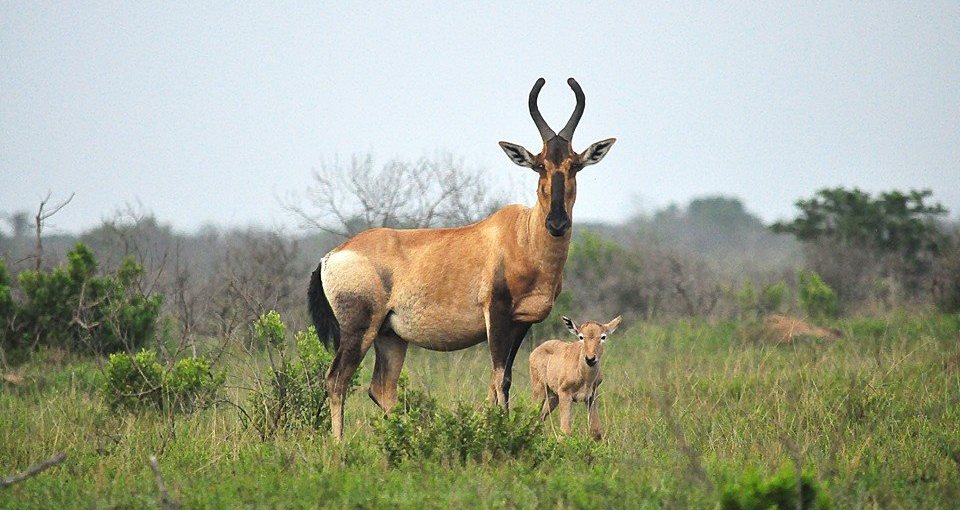 Red hartebeests live in herds of up to 20 at Kariega Game Reserve. These herds can be made up of females and calves; females, young and a territorial male or bachelor males. While on safari you may see one of the herd standing guard in order to warn others if predators approach. Red hartebeest have an excellent sense of hearing and smell and relatively poor eyesight. They are preyed upon by lions, spotted hyenas and leopards.

The red hartebeest is not a primary food source for carnivores as they are difficult to catch. They can run fast (up to 65 km/h) and keep up their pace over long distances. They sometimes bounce with all four feet off the ground which makes them look like they are floating above the ground. Perhaps they are trying to show the predator how fit they are so they give up. Fortunately, this often works!

Did you see a red hartebeest while on safari at Kariega? Perhaps you took a photo of a red hartebeest during your stay? Please share your experiences, photos and videos with us by posting a comment below, on Instagram, Facebook and YouTube. Please tag Kariega Game Reserve.