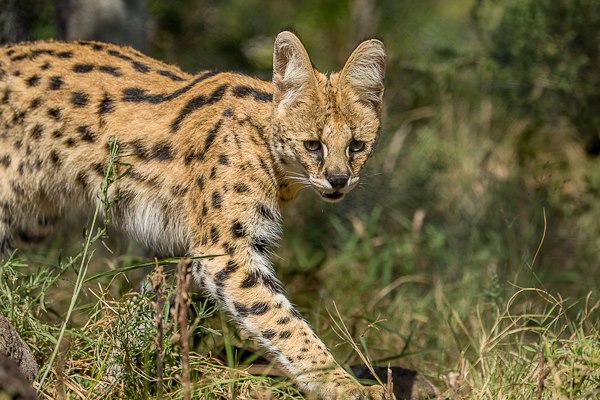 This great shot of a female serval was taken by our ranger Brendon Jennings at Kariega Game Reserve South Africa, and uploaded onto Kariega Facebook with the following caption:

"We are busy introducing serval into the reserve. Two males have been successfully released and we currently have two females in a boma (enclosure) and they should be released soon as well.

The serval boasts long legs (the longest of all cats, relative to body size) for jumping, which also help it achieve a top speed of 80 kilometres per hour and has large ears with acute hearing. Its long legs and neck allow the serval to see over tall grasses, while its ears are used to detect prey, even those burrowing underground.

Servals have been known to dig into burrows in search of underground prey, and to leap 2 to 3 metres into the air to grab birds in flight.
While hunting, the serval may pause for up to 15 minutes at a time to listen with eyes closed. The Serval's pounce is a distinctive and precise vertical 'hop', which may be an adaptation for capturing flushed birds. It is able to leap up to 3.6 metres horizontally from a stationary position, landing precisely on target with sufficient force to stun or kill its prey upon impact. The serval is an efficient killer, catching prey on an average of 50% of attempts, compared to an average of 38% for leopards and 30% for lions - Brendon"

Thanks Brendon! Watch this space for more news on our servals.