After Kariega Game Reserve lost Themba and our other unnamed bull in a poaching incident last year, Kariega is very excited to have recently introduced a new white male rhino onto this section of the game reserve in the hopes of promoting breeding on the reserve.

Although the male was introduced to generally promote rhino breeding on the reserve, many of us at Kariega are hoping that he will give our incredible survivor, Thandi, a chance to become a mother.

Although we prefer not to publish any details on the rhino population status on the reserve, we wanted to share the new and exciting possibility of finding a mate for Thandi - a rhino who has, and we hope will continue to inspire so many with her story of hope and survival, as well as her incredible ability to continue in a healthy, happy and normal life.

Rhino security and dehorning on the game reserve

We would like to thank the Chipembere Rhino Foundation and Rooting-for-Rhino School Challenge who donated the tracking device for the new male. All the Kariega rhino have been fitted with these devices which help our team track and secure the rhino on the game reserve.

Also, like all other rhino on the reserve, this bull has been safely and humanely dehorned in order to deter poachers. Kariega co-owner, Graeme Rushmere, comments “We made the decision to dehorn all our rhino as part of our strategy to combat poaching on the reserve and we have had a supportive response from both the tourism trade and guests alike.”

When visiting the Kariega, people often ask why the rhino’s have been dehorned. Although we agree it is tragic to take away something of such beauty, we have to consider the alternative – a greater risk that our rhino’s will be targeted and killed for their horns. We would like to take this opportunity to thank all our guests and trade partners for their support in this decision. It is not an easy or uncomplicated choice to make but the understanding of our friends, partners and guests makes the world of difference.

Getting comfortable in his new corner of the Eastern Cape

The 10 year old bull was released last Friday but it will take him about three months to settle down in his new environment and make contact with other rhino at the game park. Things started off well however and Kariega Conservation Volunteer co-ordinator Azel Crous commented on his release “He was so at ease stepping out of his transportation crate after the long trip to the reserve. He then had a quick look around and happily started grazing on the Kariega plains.” 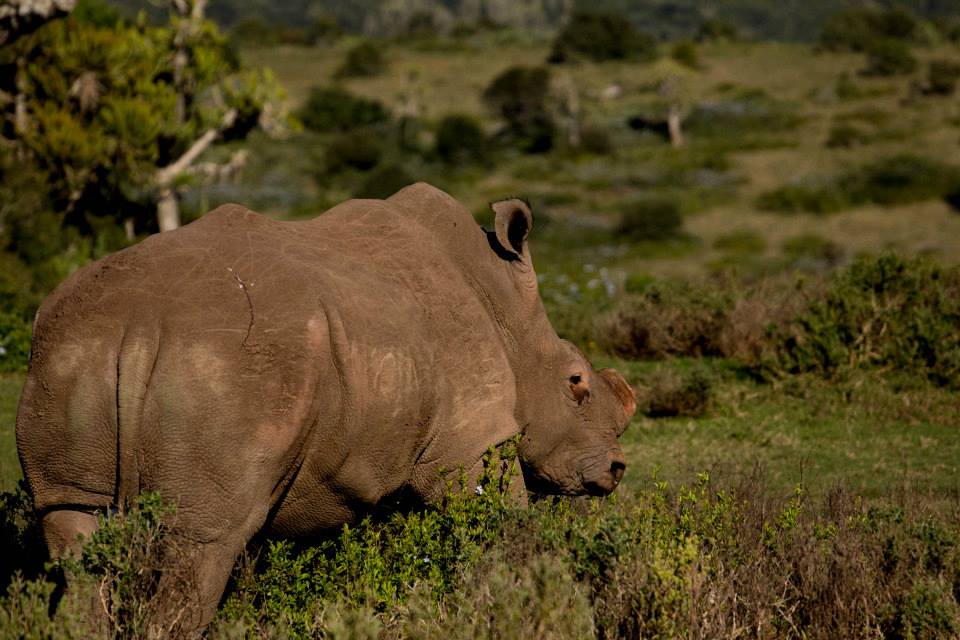 Can you not poison their horns?...I've read that not a single rhino has been lost if their horn has been poisoned....and those that have been dehorned are still being poached for the nub?....

Can you not poison their horns?...I've read that not a single rhino has been lost if their horn has been poisoned....and those that have been dehorned are still being poached for the nub?....