The Kariega team welcomed the young celebrity Marcus Scribner and his family to the game reserve in early June 2016. Marcus, who plays Andre Johnson, Jr. on the hit comedy show Black-ish and is a voice in The Good Dinosaur, was visiting as the newly appointed Chief Youth Innovator for the Reserve Protection Agency (RPA). His visit focussed on learning more about rhino poaching the the innovative work by the RPA to protect rhino. Marcus will now work with the RPA to help spread awareness about rhino poaching in the USA.

The RPA will launch a TV series later this year to increase global awareness about the plight of rhino. Marcus is the first celebrity host and was at Kariega to film some takes for the series.

Marcus was obviously inspired by his safari experience and posted the following comments and photographs on social media during his stay at our game reserve.

"Just so unbelievable to share this once in a lifetime experience with my family!" "Looks like we got ourselves a good old fashioned staring contest…" 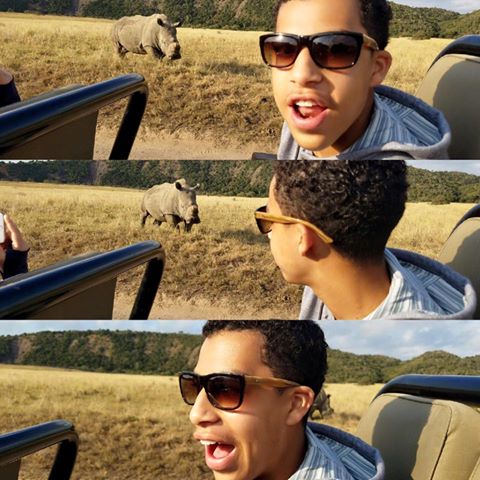 "Life in the giraffe lane!" On leaving he posted: "Farewell to ‪#‎SouthAfrica‬‬‬ you are an amazing country. I hope to return soon! And to Reserve Protection Agency & Kariega Game Reserve thank you for the best experience ever!"

Thank you Marcus and RPA for the incredible work you are doing on behalf of our rhino. It is inspiring when young, successful individuals put their weight behind real issues. Kariega Game Reserve is actively involved and committed to rhino conservation and like Marcus and the RPA are hopeful for a future with a thriving population of wild rhino.

Please post your comments below or email us on lindy@kariega.co.za.