Kariega Game Reserve, located in the malaria-free Eastern Cape of South Africa, offers a superb safari experience with unrivalled sightings of many of Africa’s thrilling animals. Over the years, based on guest feedback, we have created a list of Kariega's top 10 animal sightings. Here it is.

Visitors from all over the world arrive at our 10,000 hectare wilderness area in eager anticipation of close-up wildlife sightings and are rarely disappointed. The morning and late afternoon safari drives are lead by our expert field guides on completely open vehicles with no roof or windows. Each three hour drive yields a plethora of animal sightings and memory making moments that will be talked about for years.

For many guests a lion sighting is usually top of their wish list. Most people do not know that these powerful and majestic predators sleep for approximately 20 hours a day and watching a lion sleep is hardly thrilling! However, our field guides know that these predators are most active in the early morning and evening, which is exactly when our safari vehicles go in search of them. Over a three day safari, most of our guests experience a once-in-a-lifetime moment and come across the pride while hunting, mating or demonstrating their fascinating social behaviour, which is why a lion sighting at Kariega still holds rank at the top of the list.

The Kariega elephants have become some-what famous and our guests enjoy some of the best sightings and close-up experiences with African elephants. The elephant herds, led by a matriarch, are extremely relaxed and unperturbed by the Kariega game drive vehicles, frequently coming so close you spontaneously hold your breath! These gentle giants, touch your heart in ways you could never anticipate, possibly because the way in which they interact, the emotion they show when caring for their babies and how they play and fight with one another so resembles our human interactions. White rhino are grazers and frequent the open plains at Kariega Game Reserve. They are very family oriented, maternal giants and it is very common to observe a crash of mothers and their young of various ages grazing peacefully together. Kariega is also home to famous poaching survivor Thandi and her calves, Thembi, Colin and Mthetho. Spending time with with Thandi after hearing her story is life-changing. Her hornless profile a reminder of the brutality she fell victim when poachers hacked off both her horns with a large knife (machete) and left her to wake up in a pool of blood. It is also a reminder of the urgent need to protect and conserve this species to prevent extinction. Thandi has inspired many a guest to become actively involved in rhino conservation.

The black rhino is a browser, which means that they are most happy in the thickets where they can find the tasty leaves and be protected from lions. A sighting of the black rhino is therefore very rare and one feels hugely privileged if you happen across this endangered species. There are estimated to be only around 5,000 black rhino and they are listed by the IUCN Red List of Threatened Species as critically endangered. This is mostly due to poaching and black-market trafficking of rhino horn. View our Save the Rhino project to see how Kariega is working to protect and conserve both black and white rhinos.

One buffalo is impressive. A herd of African buffalo are mind blowing. These large and powerful sub-Saharan African bovine are very gregarious and social and hang around in small and large herds. The Cape buffalo at Kariega are healthy and growing and offer wonderful sightings. You never want to get too close to a buffalo because they are notoriously temperamental. A wounded African buffalo is considered the most dangerous wild animal and hence included in the Big 5. This term was originally used by hunters when talking about the five most dangerous large African mammal species - lion, elephants, rhino, leopard and African buffalo. It is now a common term used on safari.

Giraffe are not just one of our guests favourite animal sightings but they are also one of the most popular entries into our annual Facebook Photographic competitions. The combination of long eyelashes, knock-knees and slow, prehistoric movements make these fascinating animals totally irresistible. It is very common for our game drive vehicles to be surrounded by a tower of giraffe, some of them so close you can watch them ruminating on a ball of cud. Every so often the ball travels down their long neck to partially digest in their first stomach for a few seconds, before travelling back up again for a second or third chew! A hippo sighting can be extremely frustrating because most often all you see are two nostrils poking out of the water! Every so often, mostly at dusk, when they come out of the water to graze you see the full extent of these herbivores - an impressive pink and grey blubbery collage of scratches and scars. You have to take it all in in a flash, because these animals are very shy and once they know you are there they will dash for the safety of the water or a nearby thicket. Of course the pinnacle of a hippo sighting is when they open their mouths in a huge hippo yawn and show you the magnitude of their jaw and teeth, and you realise why, even though they are herbivores, they are the biggest killers of humans in Africa.

A flash of zebra running across your path gives one a wildly ‘I am in Africa’ sensation. The sound of their hooves and blur of black and white is mesmerising. Just as well, because Kariega Game Reserve is teeming with zebra and you are bound to see many on your safari with us. There are three species of zebra - the plains, mountain and Grevy's. The Burchell's zebra seen at Kariega is a sub-species of the plain zebra species.

The brown hyena is a nocturnal animal and as such your best chance of seeing one is on a night drive. Even so, sightings are rare and very exciting as the brown hyena is currently the most rare of it’s species. It is well worth requesting a night drive with your field guide, as many interesting creatures come out at night. If you are not lucky enough to find the brown hyena you will still not be disappointed by the night drive experience. Sightings of an aardvark, a cute, smallish pig like animal with rabbits ears and a kangaroo’s tail who’s closest relative is actually the elephant, are almost non-existent. At Kariega Game Reserve we enjoy frequent sightings of this intriguing insectivore. In the winter months most of the sightings are recorded in the late afternoon, which is makes them even more unusual and exceptional as the aardvark is nocturnal, usually spending most of the day in it’s burrow. Our field guides speculate that it is temperature that dictates when the aardvark comes out to hunt ants, and in our winter months, the ideal temperatures falls over late afternoon. 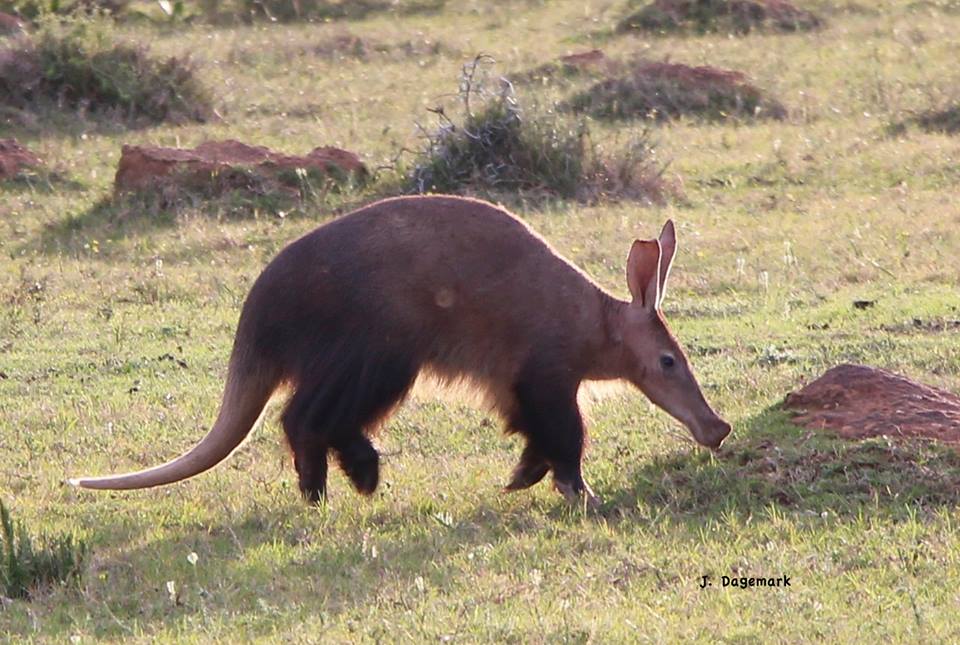