While we remember the lives of the rhino that were lost to poaching in March 2012, Kariega Game Reserve is fortunate to celebrate the arrival of a new white rhino calf almost exactly one year on. On 2 March 2012 Kariega Game Reserve suffered a tragic blow when three of our white rhino were poached to feed the traditional Asian medicine market for rhino horn. One year on, we are proud to celebrate the recovery and survival of our brave female rhino Thandi (meaning love in isiXhosa), and to commemorate the lives, struggles and suffering of Themba (meaning hope) and the unnamed rhino bull that did not make it through this horrific ordeal. Today, Kariega Game Reserve will commemorate Themba (pictured in the right and left images), honouring both his life and his struggle, with a small event to be held at Kariega Main Reception. At 12:00 p.m General Manager, Alan Weyer, and his team of rangers will kick off the event, followed by a talk by Dr Fowlds, Brent Cook from Chipembere Rhino Foundation and Bruce Steele-Gray from the Kenton Rotary Club.

When we look at the past year, we find that despite the effort of so many the demand for rhino horn continues to rise, and thus so do the killings. An estimated 668 rhino were killed for their horns in South Africa alone during 2012. That said, there are no quick fixes for a problem of this magnitude, nor can we afford to be discouraged. Additionally, there have been some triumphs along the way which we must use to encourage ourselves in the ongoing fight against rhino poaching. 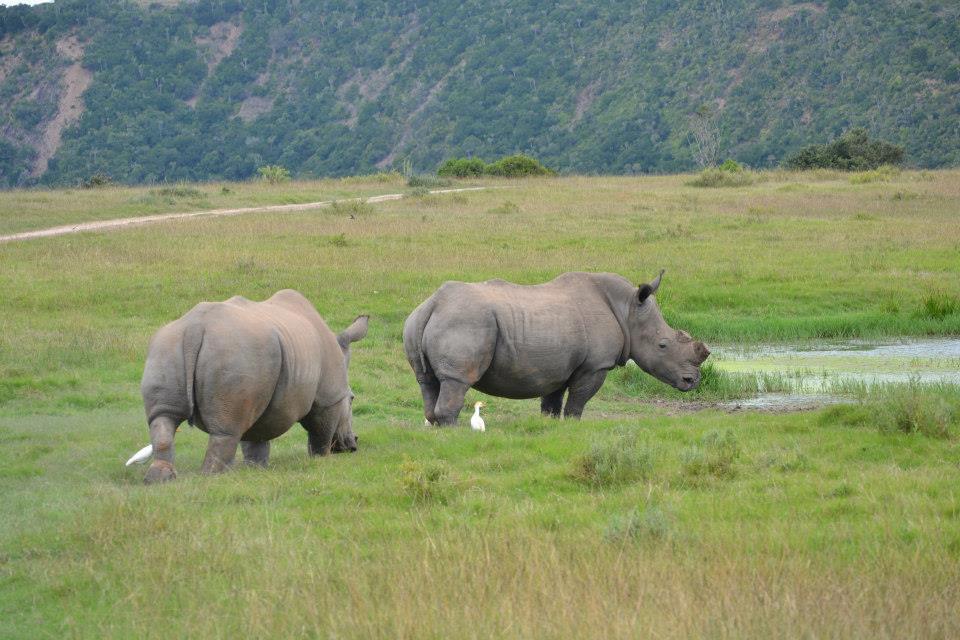 One such triumph is the birth of a new rhino calf on Kariega Game Reserve, almost exactly one year on from the poaching incident. It is estimated that the little one was born around the 6 March 2013. The mother is the female companion of Thandi and separated from her to give birth. The Kariega Operations Manager, Jason Loest, took a helicopter to investigate on the 12 March and was fortunate to catch a glimpse of her in thick bush with her newborn calf. Due to the long gestation period of a rhinoceros (about one year and three months), there is a strong possibility that the calf was sired by either Themba or the unnamed bull before they were poached.

In the image above the new mother (on the right) is captured with her close companion, Thandi (on the left), shortly before the calf was born. Unfortunately no pictures of the new calf just yet, but when they come out into the open pictures are sure to follow!

During the past year we have continually been inspired and encouraged by the amazing support for Thandi and Themba and our Kariega rhino through the Kariega Foundation Save the Rhino Fund.

So much has been accomplished with the help of so many wonderful individuals and groups including Dr Will Fowlds, My Rhino, Kisma & Co Rhino Tears, Rhino Run, I Will Be Your Voice, Helping Rhinos, Tamlyn McMullan involved in Rock n Ride for Rhinos and Skydive for Rhinos, Jo Wilmot and everbody involved in Rooting for Rhino School Challenge, Lady Riders Motorcycle Group SA, The Wilderness Foundation, and Angie Goodie of Thandi’s Fundraiser in the Isle of Man. Thank you for helping to protect and care for the rhino’s at Kariega Game Reserve and across the country. Thank you also to all of the individual donations and work done by so many helpers across the world.

Lastly, thank you to all those who visited our reserve and continue to support Kariega Game Reserve. It is our hope that each visitor who experiences the wonder of African wildlife will in some way be inspired to help conserve it. So while we reflect during March, remembering the lives of the rhino we lost twelve months ago, let us feel proud of the lives and struggles of our two lost rhino bulls, proud of Thandi’s miraculous recovery, proud of the new calf on the reserve, proud of Dr Fowlds and the Kariega staff who work so tirelessly on the ground, proud of our friends in conservation who have given so much in the fight against poaching and proud of the contribution that every individual makes to rhino conservation. Our heartfelt thanks to all, keep up the spirit and the incredible work.

Thandi - one year one she has made a full recovery. Picture by Jason Loest

If you have any questions, comments or images you would like to share with Kariega, please feel free to email lisa@kariega.co.za, or you can find us on the Kariega Game Reserve Facebook page.

What wonderful news after a year of heartache. To hear of the birth of this previous little soul, to continue Themba and the unnamed bull's legacy at Kariega is enough to lift everyone's spirits. Themba fought a brave fight with Dr Fowlds at his side and the survival of our Thandi is fantastic. Maybe (if the new addition is a little boy) he could be named Themba II as he will be the beacon of 'Hope" that was so painfully extinguished with the killing of Themba. Thank you all at Kariega and Dr Fowlds for your tireless work. So looking forward to see pictures of this little one - KInd regards, Lyn du Plessis - Tzaneen - Limpopo Province.

Aww this is such lovely news in a troubled time . Our love to all of you and to angie from the isle of man. Love to thandie and all the other rhino's. More fundraising later in the year from here. Keep up the great work that you all do guys xx