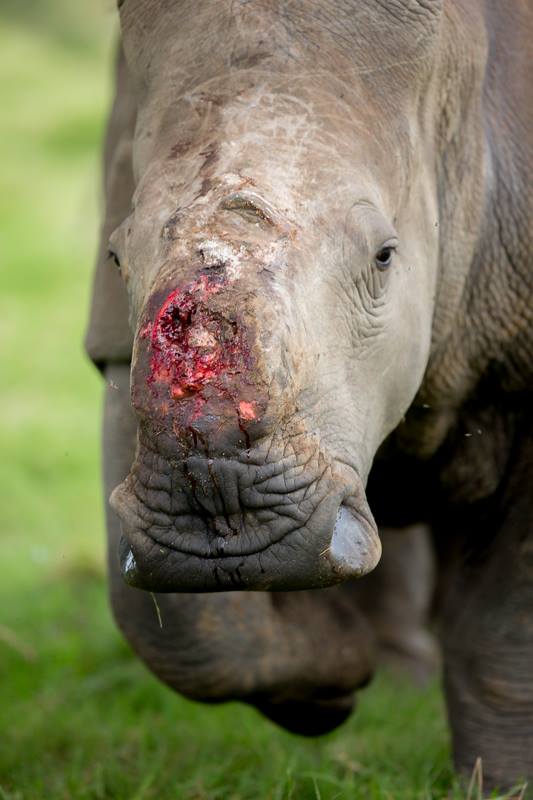 "I have very seldom uploaded less "glamorous" images of Thandi. For those that don't know her she is a white rhino female that was poached along with 2 other rhinos in March 2012. Despite having her face hacked with a machete and losing perhaps 30 litres of blood she survived...

Many individuals and corporates can be thanked but ultimately it may have been largely due to her own indomitable spirit...

She just recently had a surgical procedure to remove loose bone fragments that were clearly irritating her as can be seen in this photo from 6 January 2014.

Thandi is isiXhosa for 'nurturing love'.

“Life will break you. Nobody can protect you from that, and living alone won't either, for solitude will also break you with its yearning. You have to love. You have to feel. It is the reason you are here on earth. You are here to risk your heart. You are here to be swallowed up. And when it happens that you are broken, or betrayed, or left, or hurt, or death brushes near, let yourself sit by an apple tree and listen to the apples falling all around you in heaps, wasting their sweetness. Tell yourself you tasted as many as you could.” Louise Erdrich, The Painted Drum

I am a South African living in Mumbai and this is a great way to keep in touch with Africa, AND I Love Thandi

Thank you Brendon, thandi looks so much better than in earlier photos, let's hope she is on the road to recovery.

My Y5s have been asking about the progress of Thandi, will repost this on our class blog. Great to see an updated picture of Thandi and know that she's getting the treatment she needs to recover. Hug to Thandi from 30 children, who all love rhinos, and their teacher and Teaching Assistant. xx