We’ve had so many lovely days during May with bright blue skies and a generous amount of sun. The Kariega Conservation Volunteer team took a well deserved two week break this month and so this will be a shorter than usual newsletter.

During the past two weeks we were fortunate to collect a significant amount of lion prey data. This included watching a pride of lions feasting on a zebra during a night drive and close-up observations of incredible interactions between the pride members.

All elephant observations this month were on open grassy plain areas. As the grass is still green and has not gone into winter dormancy, the elephants are still utilizing it prolifically. All the elephants were almost always found close together, whereas usually it is not uncommon to find the big bull wandering around on his own. Our elephant family tree is coming on well and only a few photographs are outstanding.

The Kariega’s rhinoceroses are doing really well, and as always, it has been lovely spending some time with them.

We were really pleased to see two positive stories regarding rhino conservation in the news recently. The first was that the USA gave one of the longest sentences for wildlife trafficking to Zhifei Li. He was sentenced to 70 months in prison for leading a rhino horn and elephant ivory smuggling operation. The second piece of good news was that Vietnam’s Ministry of Health and the Traditional Medicine Association agreed that there is absolutely no evidence that rhino horn can cure cancer. Conservationists agreed that with this big breakthrough for our rhinos. The next step is to spread this to the people who consume rhino horn for medical purposes throughout Vietnam. Read more about this on our Kariega Conservation Volunteer Facebook page.

The Kariega rangers have observed several signs of spotted hyena on the reserve recently. We have placed the camera traps this month in areas where we hope to obtain images of these illusive night creatures. 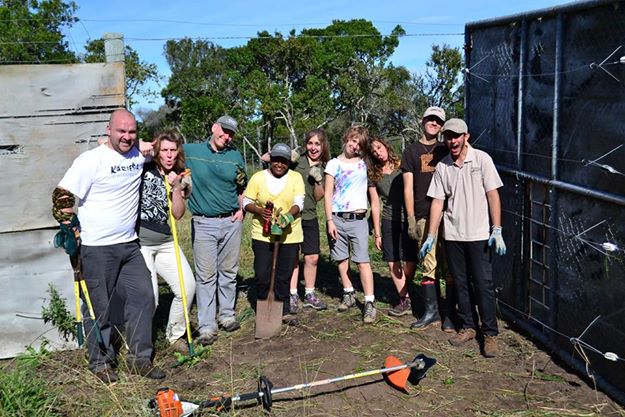 The Kariega volunteers helped getting the boma (animal enclosure) ready for a Nyala breeding programme. All the volunteers jumped in eagerly and cleared all the bushes and branches around and in the boma. They also helped to put up shade cloth between the camps so that the Nyala bulls and cows cannot see each other. Sand was loaded and spread in the boma corridors to prevent thick mud from forming after heavy rains.

The volunteers also enjoyed two hikes during the month. The first was along a beautiful stream towards a waterfall. This hike gave us the time to appreciate the smaller organisms on the reserve; crabs, frogs, dragonflies and butterflies around the fresh water pools. During the second hike the volunteers were dropped of by a 4x4 vehicle on top of a mountain where we had a breathtaking view. We then hiked down the mountain and onto the grassy savana plains. Game species including blesbok, giraffe, zebra, springbok and blue wildebeest were sighted. This hike was definitely one of the highlights.

If we had so much fun and did so much work in a mere two weeks, imagine what we will get up to during the month of June!