We enjoyed a full and happy month during March in balmy and warm weather - lots of research, bush clearing, a visit with local school children and various great weekend activities.

We were fortunate to have excellent elephant sightings during March. We gathered a lot of useful information and data regarding their spatial movement and their impact on the vegetation at Kariega.

We also worked on identifying elephants. There are quite a few younger members of the herd that still need to be identified. This has been quite difficult to do as they do not yet have unique markings or scars like the older elephants. The volunteers observed that there are two older cows with their sub-adult and younger calves wandering on their own, quite a distance from the rest of the main herd. Often an older calf will remain with its mother even though a newborn is present and the older calf will assist to raise its younger sibling.

The big bull is still mostly wandering alone. One of the young bulls sometimes joins him. There are a number of other younger bulls that also wander alone from time to time. These bulls are in their late teens to early twenties and like to play-fight with one another. They test their strength and are already determining dominance amongst each other.

We noted a few interesting changes in the lions activity this month. The volunteers observed how the dominant male lion is in the process of pushing out a sub-adult male from his pride. The sub-adult male is getting quite big and is starting to develop a mane. The big male is trying to eliminate any possible competition and therefore acts aggressively towards this sub-adult. Many early mornings and evenings were marked by impressively loud lion roars – mostly by the dominant male.

From the data collected via the two-way radios, observing fresh carcasses and lions feasting on carcasses, the volunteers noted that warthog (Phacochoerus africanus), impala (Aepyceros melampus) and blesbuck (Damaliscus pygargus phillipsi) were the most frequently caught prey during March 2014.

March also gave the Kariega Conservation Volunteers various opportunities to collect data on the spatial movements of the white and black rhino. This is sensitive information and will not be shared for safety reasons. Thandi, the white rhinoceros cow that was poached two years ago and survived, is doing really well. We have been fortunate to have really good sightings of her. She seems relaxed and peaceful.

The latest statistics for rhino poaching, as at 14 March 2014, is that 172 rhinoceroses have been poached in South Africa (three of which were killed in March on a nearby reserve in the Eastern Cape). A total of 54 poaching-related arrests have been made in South Africa, of which four were in the Eastern Cape. Let us hope we can find a sustainable solution to ensure that the deaths in 2013 (a total of 1004 rhinoceroses were poached) will not be repeated during 2014.

The Kariega Conservation Volunteers set up cameras at several different locations on the reserve in the hopes of photographing a leopard. The cameras are mostly in areas where there is not much human activity and where there have been signs of leopard, including recent tracks. No photographs of leopards have been recorded this month, however, we captured good pictures of an Aardwolf and a Black rhinoceros. It is always interesting to see what is sneaking around in the bush! We are waiting on our new rechargeable batteries to help increase the recording time of our cameras.

In spite of some extremely hot days this month, the Kariega volunteers got their hands dirty and chopped down about 175 Pine trees, 530 Black wattle and 150 Red-eyed wattle, varying in size from seedlings to medium sized trees. The seedlings are usually pulled out with their roots and the larger trees that are too big to cut down, are ring barked. The volunteers used machetes and hand saws to cut down the trees. The remaining stumps are painted with an environmentally safe herbicide to prevent re-growth.

The volunteers assisted with various bush control activities. Three roads on the reserve were targeted and the volunteers poisoned Searsia sp. with pellets at the base of their stems. The pellets dissolve when it is wet and kills the plants from the roots up.

Due to thunderstorms in South Africa, erosion is a big problem because of the resultant quick water run-off. The Kariega Conservation Volunteers identified areas on the reserve where erosion has started and placed the branches of invasive plants into these gullies. These branches stabilise the soil by preventing animals trampling the areas and also give pioneer plants, like grass and shrubs, a chance to grow. The vegetation will slow down the water run-off and help build up silt. Sub-climax and climax vegetation can also start growing and create a stable environment for other organisms to live and restore the natural balance. 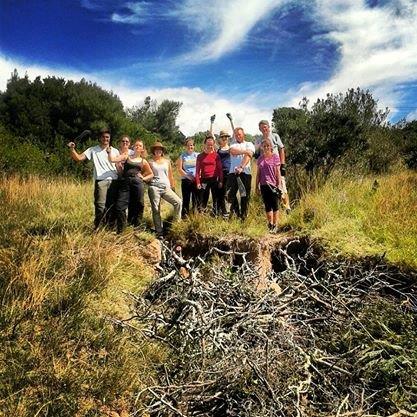 The Kariega Conservation Volunteers helped out at the Klipfontein after-school centre in conjunction with The Kariega Project and the Kariega Foundation. We assisted the kids to write letters to their pen pals in the USA, helped administer reading tests and played business simulation games on computers with the kids (a newly set-up mobile computer lab thanks to the NGO The Kariega Project). This was a great day and we loved the hugs and happy songs from the learners. It makes us realise that giving makes us richer people.

Our March weekends were filled with fun break-aways including shark cage diving in Plettenberg Bay, horse riding on the beach in Port Alfred, a canoe trail on the Bushmans River and a trip to the historical town of Grahamstown.

To find out more about what the Kariega Volunteers get up to, check out their projects on the Kariega blog, or view their webpage on the Kariega website here. You can also find their lively Facebook page here.