Insects, bugs, critters or crawlies. It doesn't matter what you call them, some people get the chills when they hear these words, let alone when they actually see any of the these little creatures! But why? Is it because of a bad experience with a creepy crawly in the past or just an irrational fear? Read on to find out some facts about the amazing insects, bugs, critters and crawlies that you may encounter at Kariega Game Reserve while on a guided safari tour. We hope that if you learn about these creatures that you won't fear them but be amazed at their adaptations and importance in our environment. Insects, Bugs, Critters and Crawlies: All Shapes and Sizes

Insects come in all shapes and sizes - round, oval, thin, fat, a variety of colours and feeding preferences. In fact, insects are the most diverse group of animals on Earth and make up more than half of all known living organisms. There are more than a million insect species and the majority of these are small, usually less than 6 mm (0.2 inches) long.

Even though there are a huge variety of species, all insects are are invertebrates (without a backbone) and most insects have the following five characteristics:

The greatest number of insect species are from four groups: beetles, butterflies and moths, ants, bees and wasps (pictured above) and flies. This means that crawlies and critters such as millipedes, spiders, scorpions and ticks are not insects because they don't have these characteristics.

Insects are Important to Humans

No matter what a bug looks like or how it behaves, each has a role to play in the world, also called a niche. We may not always know or understand what these are, but each insect is highly adapted for doing something in particular. Examples are a bee pollinating a flower, a dung beetle collecting dung and a grasshopper being eaten by a bird. There is so much we don't know about these critters and their behaviour.

One thing is for certain, without bugs the human species may well be extinct! They are fundamental to our survival as they help to maintain the balance in nature. Entomologists (people who study insects) have done a lot of research into the importance of insects and how they contribute to human survival.

Think about this. Imagine a world where there are no bugs around, no flies or mosquitoes buzzing around your head, no ants pestering you at a picnic. Sounds wonderful right? But now imagine that there are no insects to pollinate the plants that we rely on for fruit and vegetables, no critters to decompose the dead animals and plants, to help in the formation of soil and no food for the huge variety of animals and birds who depend on insects as their main food source. Insects also provide humans with food such as honey and many cultures eat specific bugs as they are an excellent source of protein. Insects are also used to create dyes, waxes, textiles and pigments.

Insects can also cause harm to humans. For example mosquitoes can carry microorganisms that cause malaria and can also spread viral diseases such as dengue and yellow fever. Insects also cause significant harm to crops, damage timber in buildings, wool and other clothing as well as cause bites and other skin irritations. While on safari at Kariega Game Reserve you may be fortunate to find some of these interesting insects and perhaps see some of their adaptations and interesting behaviour. You will also be able to discuss any insect with your safari guide. They will be able to identify so many species and tell you more about them. If you have time, why not explore your backyard, local park or any other space in nature and see what insects you can find? You can use the internet to help you identify them and learn more about the millions of insect species that are living around you. If you have a magnifying glass, you can use this to look at the insect more closely and see what incredible features you can discover. You can also use binoculars by simply turning them around and looking from the "wrong side." Keep the usual viewing lens as close as possible to whatever you are looking at.

You may have also found an interesting bug while on safari and are not sure what it is called. This is what happened to guest Graham Harvey with the critter that he photographed below. Graham uploaded the image onto our Kariega Facebook page and we asked guide Wayne to identify it. He let us know this is a bladder grasshopper. These nocturnal herbivores are endemic to coastal regions of southern Africa, including the Eastern Cape where Kariega Game Reserve is located. 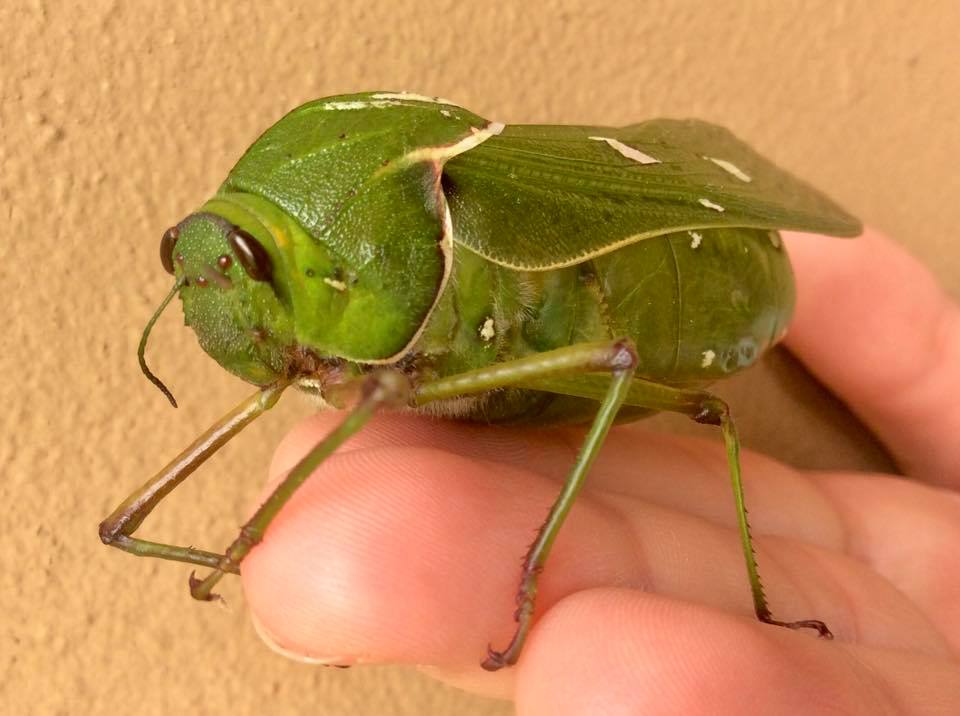 If you found a creepy crawly while on your Kariega safari please share it with us on Facebook, Instagram and Twitter. We will happily try to identify it for you. We also encourage you to subscribe to our blog so that you can receive updates via email.