Kariega volunteers started this year with a bang and have already done some great work on the reserve. All our 2014 projects will continue to run during the course of this year and we are excited about making some more worthwhile contributions on Kariega Game Reserve, as our volunteers have done for the past 10 years.

During January we had some wonderful elephant sightings, some that kept the volunteers on the edge of their seats! We continued to monitor their browsing and the effect on the vegetation. The plants most consumed during January are illustrated in the pie chart below. 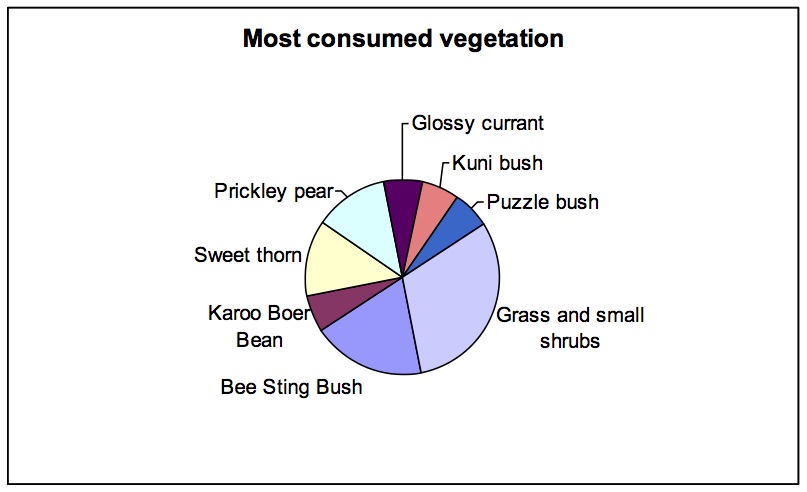 Figure 1: Vegetation most consumed by elephants during January2015 on Kariega Game Reserve

The volunteers were very fortunate to witness lions stalking and hunting a few times during January. The sub adult lions were hunting right in front of the volunteer house twice during this month. The first time they tried to catch a warthog and the second time an impala. They were not successful with either of these attempts.

On another occasion we missed a warthog hunt by mere seconds and arrived on the scene when the pride just started feeding. Warthogs and black and blue wildebeest were the most consumed prey during January.

Thandi, the rhino cow that survived a brutal poaching attack in 2012, gave birth to a healthy young calf on 13 January 2015. Thandi and her calf kept to the thick bush for quite a while, but towards the end of January they were seen on the open plains. Our anti-poaching team have been monitoring the cow and calf closely on a regular basis and we are happy to report that both mother and baby are doing very well. This little rhino is truly our very own miracle on Kariega Game Reserve. See the video below with great footage of Thandi and her new calf.

The volunteers were very excited to see a honey badger on one of our cameras that was set up near one of the dams on the reserve. This is a rare sighting on Kariega and great to know that we have them on the reserve. 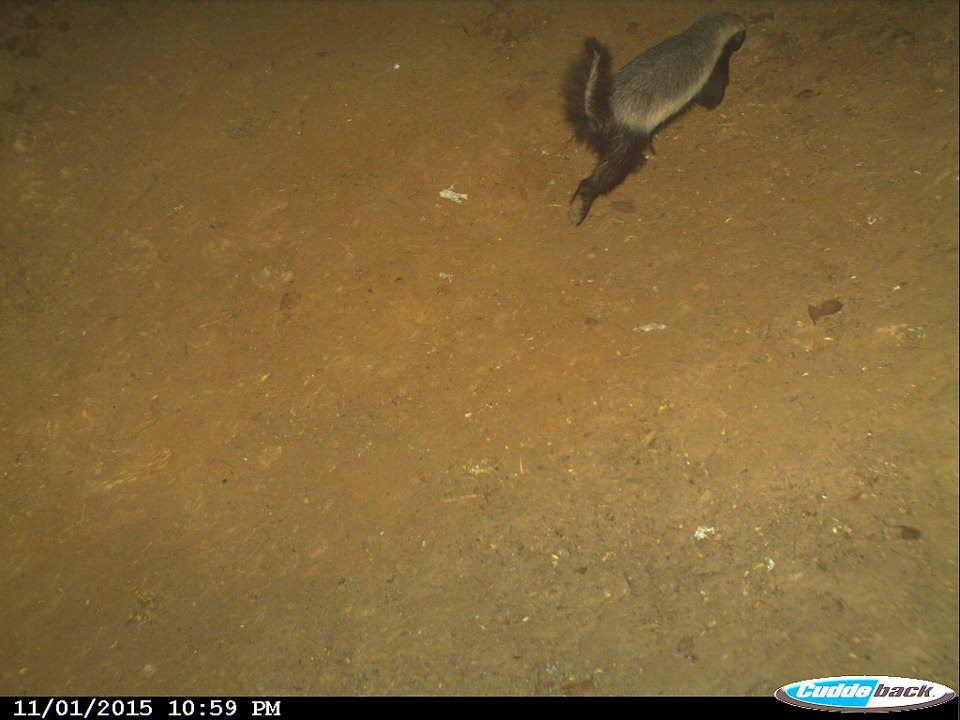 On one occasion we came across hyena dung and decided to set a camera trap up nearby. We were rewarded with a lovely brown hyena image after one week. 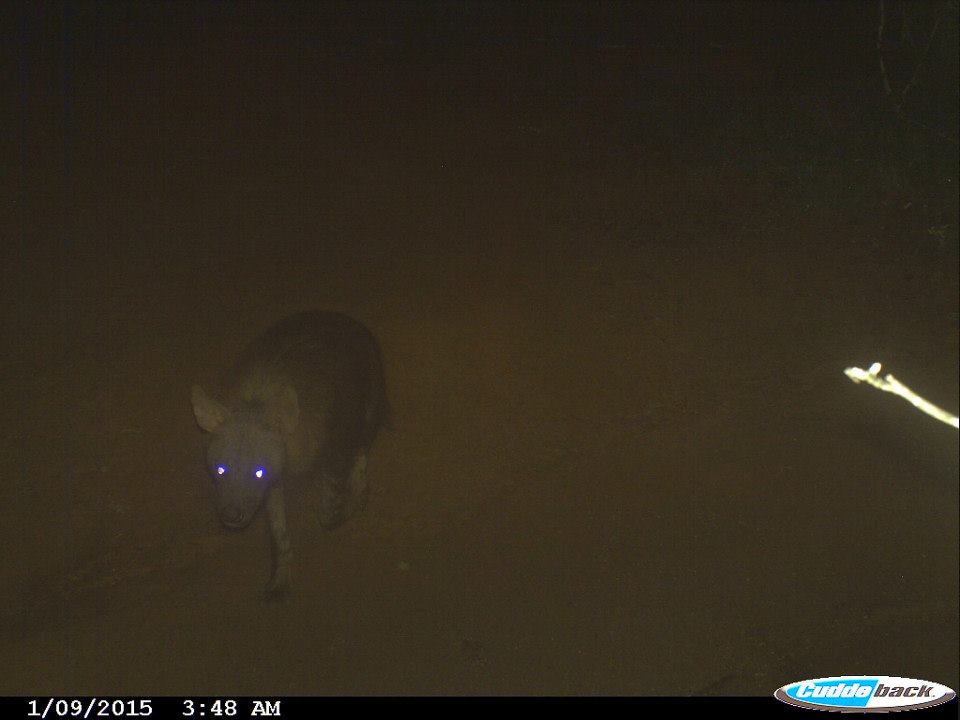 We have received some great news that we will be receiving two new camera traps from the Kariega Foundation soon. We are excited to get them setup on the reserve to increase our chances of spotting some elusive leopard and other rare and endangered species.

The volunteers planted 87 Pork bush seedlings (Portulacaria afra) on the reserve this month. This is our miracle carbon fixating plant in the Eastern Cape. Most wildlife species love the taste of it and it is especially well consumed by elephants.Plant nursery work

The volunteers continued with the nursery we started in 2014. The Coral trees are growing beautifully, and we added more during the month of January. There is roughly 390 Coral trees (Erythrina lysistemon), 86 Spekboom (Portulacaria afra), 40 Cape-ash (Ekebergia capensis), 200 White-ironwood (Vepris lanceolata), 30 Cluster figs (Ficus sur) and 30 Wild olives (Olea europaea subsp Africana) currently in our nursery. 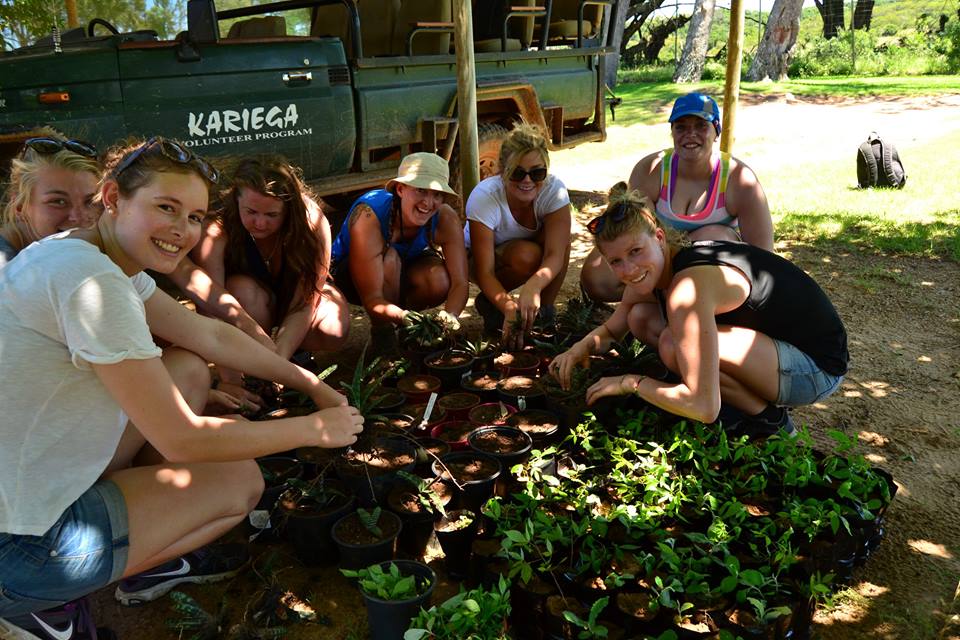 South African schools have their main holidays over the December-January period so we have been unable to attend our usual Wednesday mornings at Farmerfield school. Schools opened on 15 January, but have a two week settling in period. We will be assisting again at Farmerfield school from February onwards.

Our first weekend in January, we all went horse-back riding on one of our stunning beaches in Kenton-on-Sea. This is always a big hit amongst our volunteers. The second weekend some of our braver volunteers went skydiving outside Grahamstown and reported back that it was an amazing experience. The third weekend, some of our volunteers went with a travel adventure company on an action packed weekend to Plettenberg Bay. The weekend included swimming with seals, bungy jumping from the Bloukrans bridge (a 216 m jump) and hiking along beaches. Some of our other volunteers went to Port Alfred and did hydro-biking on the Kowie river – also a lovely local activity that is well priced. The last weekend all the volunteers went to a nearby elephant sanctuary for some up close and personal interaction with these majestic creatures. I think we can all agree that January has been a great start to 2015. If you are looking to make a meaningful contribution towards African conservation and have a great time whilst doing so, come and join Kariega Game Reserve as a volunteer. Places for May to August are filling up very fast so be sure to not to leave your booking too late. Send us an email today to enquiry about availability. I watched the video of Thandi and bawled like a baby at the terrible scar on her face. I don't know how people can do this. You all are so fortunate to be able to do this! You all are in my prayers. Trina, honey, I know you are going to bring home loads of stories!! Love you, Auntie Deb