Local conservationist and author Bart Logie shares his thoughts on lynx, porcupines and honey badgers and their place in conservation alongside the Big 5. Bart lives with his wife Caryl just over an hour away from Kariega in the beach village of St Francis Bay.

Lynx Spotted in St Francis Bay Near to Kariega

We first saw it while driving into a pearl grey and salmon pink sunset. It scurried across the road and then crouched beside the grass-edged tar, watching us warily. A week or two before we came across the lynx (also known as the caracal or rooikat) with its distinctive tufted ears and lanky legs, Caryl had watched the mother hunting for its two young kittens while several of the local residents had spotted the lynx and its babies beside the golf course. For years we have known that there were lynx about – a dog of ours came off second best after an unexpected meeting with one – and we have occasionally seen them crossing the road or making their way up a sand dune, but recently sightings have become more frequent. This may partly be due to there being more people living in the area, but also to the fact that there are not any small-stock farmers in the vicinity. Now that the lynx are no longer hounded by irate farmers they are losing their fear of humankind. And apart from a large variety of small prey, there are great gatherings of scuttling guineafowl in the local lynx larder. It would seem that our lynx are thriving and living off the fat of the land. 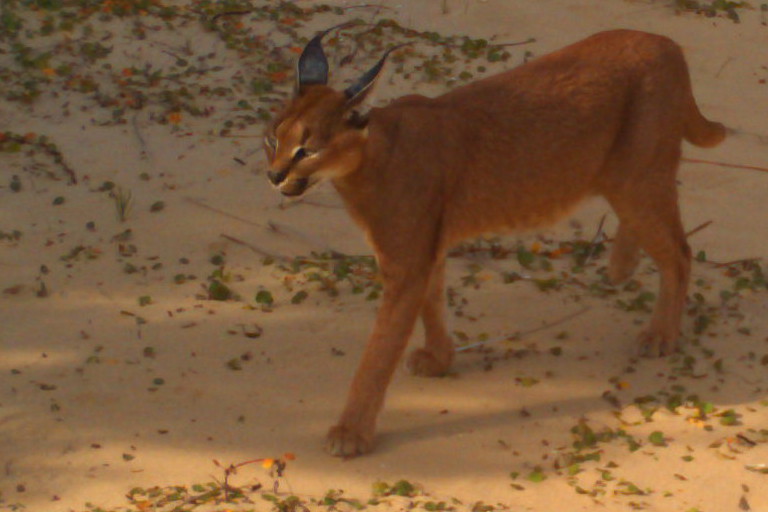 I wrote recently of the partially successful rescue of a family of porcupines stuck in a drain and these too are becoming far more common. We are visited regularly by one that has made a determined, although to date unsuccessful attack on the wooden fence surrounding our back garden. Elsewhere on the property it has completely annihilated two of the three paw-paw trees (sub-tropical fruit Carica papaya is most commonly known as papaya). Such have been its depredations that we have had to add steel reinforcing rods to the fence and bricks along the edge to deter it. There are numbers of people in the area who would enjoy a joint of roast porcupine on the dinner table, but porcupines are not easily snared and are wary animals that steer clear of trouble. Even if taken unawares by dogs, they are quite capable of dealing with their attackers. Like the lynx they appear to be thriving and are finding that suburban gardens contain much that is to their liking. Yet another creature of which we are seeing far more than in the past is the honey badger or ratel. Like the porcupine the honey badger is largely a nocturnal animal and is normally seldom seen. There are beekeepers in the area, and as the honey badger’s name suggests, they pose a threat to hives, but apiarists have learnt how to cope with the menace. But honey badgers are not dependent on honey and bee larvae, and happily devour all manner of insects and grubs, small reptiles, tortoises, young birds and eggs. They too are profiting from the waste that we humans create and are venturing into urban areas to investigate the contents of dirt-bins.

We have watched entranced a pair of honey badgers happily playing among the dunes and, although surely aware of our presence, they took not the slightest notice of us. In The Game Animals of Southern Africa, author Astley Maberly remarks that they tame easily and make good, intelligent and affectionate pets. However it should be noted, lest at Kariega you are tempted to make friendly advances to a honey badger, that although generally peaceful animals they are fearless and willing to tackle almost impossible odds. Col Stevenson-Hamilton, founder ranger of the Kruger National Park, recorded a case where a buffalo bull bled to death after being attacked by a honey badger that tore out its testicles! Apparent Increase in Small Creatures While Big 5 Under Threat

Now what is interesting about these three different small animals is the apparent increase in their numbers, or certainly in their sightings. Rhino, elephant and lion and also many smaller creatures are under threat and may be reaching the point of extinction, yet lynx, porcupines and honey-badgers appear to be thriving and to be adapting their ways to those of mankind. Many of the small creatures haven’t the appeal of lions, rhinos and elephants and not many people, to my knowledge, has put them on Facebook or established charities for their support.

Conservationists faced with the protection of these ‘non-sexy’ creatures have either to find ways and means of making them appealing, or try and discover how the three I have mentioned are successfully changing their ways with little likelihood of their extinction. The cynics may well shrug their shoulders and maintain that whether or not the rhino and other creatures survive makes little difference, for is it not natural selection at work, albeit in a rather shorter time-frame than usual?

Conservation of Wildlife Both Great and Small

I cannot agree with this argument and it heartens me that there are others, such as the staff of, and many of the visitors to Kariega Game Reserve that agree with me. Creatures both great and small have brought so much interest and enjoyment to my life that I hate to think that future generations might be deprived of this pleasure and stimulation.

The lynx having watched us for some time, decided that it was safe to carry on its way in mum’s footsteps and after a last glance in our direction turned and slipped away into the nearby dune slack. We silently turned to smile at one another before continuing on our way into the sunset.

Do you have any stories about your trip to Kariega? If you would like to share this with us please email bronwen@kariega.co.za. We’d love to hear from you.