September had so many wonderful highlights and numerous national significant days were celebrated by volunteers on Kariega Game Reserve.

Volunteers got to meet one of Africa’s most travelled man, adventurer, activist, conservationist and a true legend among Africans – Kingsley Holgate. Kingsley is currently on a mission across South Africa to help raise awareness of rhino poaching by letting the youth of today express themselves through art. The local school where volunteers teach weekly also took part in the Children’s art rhino competition. The winning pupil of our school along with about 20 other pupils from the surrounding areas got to meet Kingsley at Kariega Game Reserve, where he had an inspiring talk about Africa and rhino poaching. The kids also got to go out on a game drive afterwards to see a rhino in the wild. A once in a lifetime experience for our school’s winner – Max, who got to see his first ever elephant on the drive too. 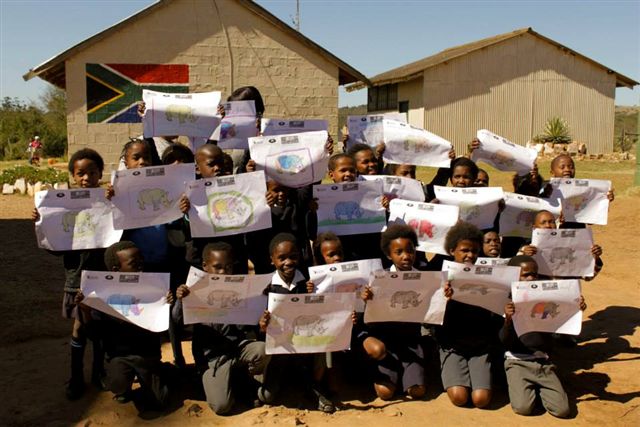 National Arbor Week and Coastal clean-up Day were celebrated by Kariega volunteers by means of planting the so called ‘miracle tree of the century’ – Spekboom, and by hiking along the beautiful Kenton-on-sea coastline to clear the beaches of any rubbish. Volunteers got the surprise of their lives one afternoon while harvesting Spekboom cuttings to plant…a BLACK RHINO was happily browsing away a mere 20m from the volunteers collecting trees on foot! Walking to the car has never been done so fast by any volunteer this whole year. It’s only when we were all safely on the car that all of us burst out into laughter and were relieved that the rhino didn’t even notice us. Never a dull moment in the bush! 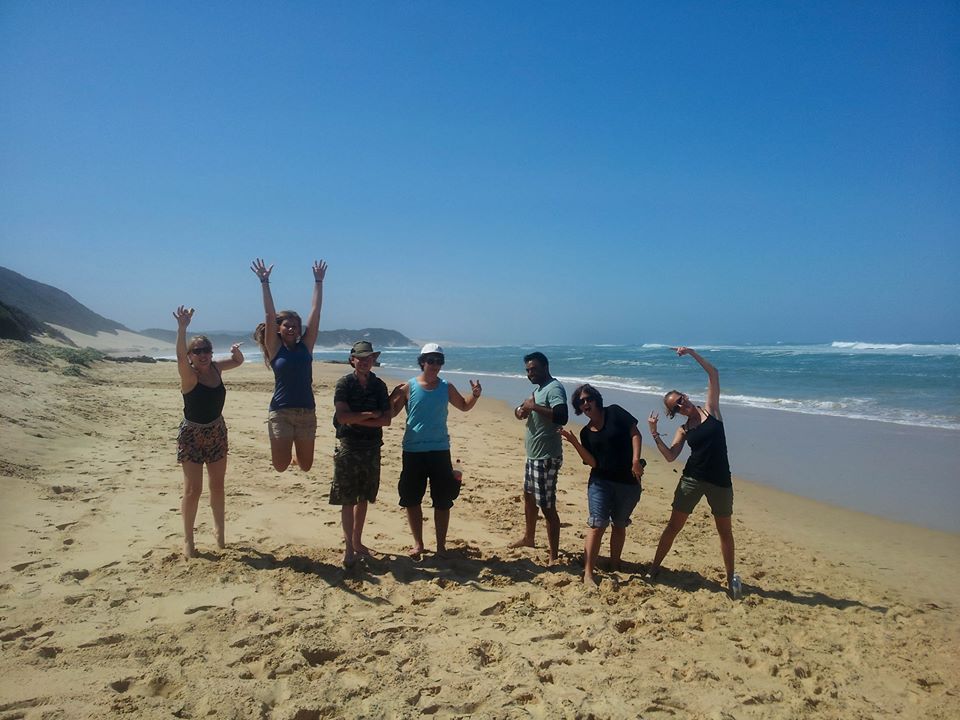 Volunteers also got to take part in a 500-runner strong Rhino Run event held on the beautiful coastline of Kenton-on-sea on the 22nd of September – World Rhino Day. It was a beautiful 6km run along the beach and through some dune thickets. An amazing day celebrated for a precious cause.

It is important that visiting volunteers to the area get to experience and learn as much as possible about the area, its history, cultures and people. In the last few weeks volunteers had the opportunity once a week to visit the surrounding rural areas and help out with gardening, teaching in the crèche, doing house visits and getting involved in youth groups aimed at keeping the local teenagers away from crime and drugs through education and by giving them activities to do like sports. Most of the volunteers were totally shocked by the living conditions of these people and eyes were opened and made them realise just how easy it is to take things for granted. We hope to continue with this new community project that is aimed at enabling and equipping the local community with the skills they need to be self-sustainable and self-sufficient by providing services amongst each other that will be of benefit to the whole community. 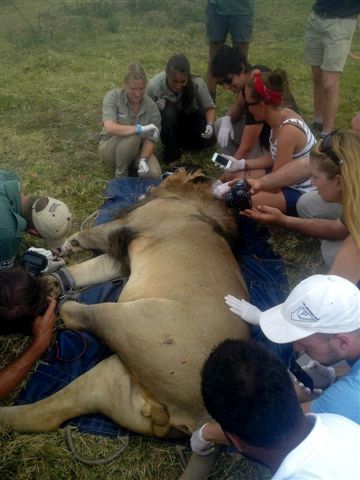 While volunteers were out facilitating a discussion about crime and drugs in the local youth group one day, we got a call from Kariega’s Wildlife Manager – our dominant lion is going to be darted and collared in an hour. We rushed to the reserve (adrenaline pumping) and the whole capture procedure went very smooth and was a big success. Volunteers got the once-in-a-lifetime experience of touching and being up close to a massive lion in his prime. The reserve collared the lion in order to make gathering data on these magnificent creatures a bit easier by enabling us to find them in a massive and thick vegetated reserve.

We were out monitoring our elephant herd one day when we were surprised by two new-borns stumbling between the massive legs of their caring mothers. What a welcomed sight, seeing our herd thriving in the reserve and giving birth to a new generation of magnificent giants. We could not be happier!

In between all the hard work of removing alien trees from the reserve and controlling bush encroachment by applying herbicide by hand to each individual tree, volunteers also had the chance to relax and enjoy the marvels that this beautiful reserve has to offer. This included canoeing on the Kariega River, hikes, visiting the secret waterfall, camping and having barbeques in the middle of the bush.

From my side I want to say good-bye and thanks to all of the wonderful volunteers that have come to Kariega and have made this year the absolute adventure that it has been! I am off to a new chapter in my life and I leave you with the more than capable and friendly Frances who is going to lead new volunteers into countless more treasured memories and adventures.

Thank you so much Azel for the most amazing experience that you gave Harry. He is on his way to Kenya for the next phase of his adventure and we know that he will never forget his time at Kariega this September. Truly magical!

A HUGE thank you to Azel for her 200% effort that made my April volunteer experience so awesomely UNBELIEVABLE!! Great luck to you!!