When we came downstairs in the morning it was obvious that there had been an intruder during the night. Scattered about on the stairs and across the carpet were banana peels, and the fruit bowl was empty. A hurried appraisal of the contents of the house failed to show anything, other than the fruit, that was missing. I breathed a sigh of relief and began wondering who the visitor might be.

We are occasionally visited by vervet monkeys, but their visits are always during the hours of daylight and they never come scampering through the trees during the night. For the time being our nocturnal visitor remained a mystery.

That evening, while we were watching television, Caryl sensed something amiss and turning around was just in time to catch a glimpse of a small, furry face at the window apparently watching, as we were, the figures on the television screen. We were still unable to positively identify the creature, but at least we were now pretty certain that our intruder was not, thank goodness, some hungry child, but was a wild denizen of the surrounding coastal bush.

The next night we were again visited, and this time were able to see in the branches of the coral tree outside the living-room, the striped tail and spotted body of a large-spotted genet – Genetta tigrina. 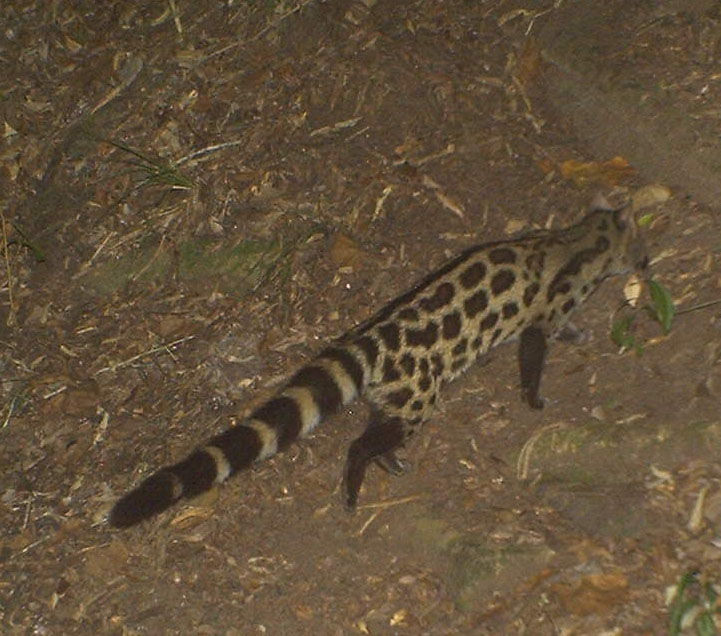 This individual was photographed by one of the trap cameras set up on Kariega Game Reserve. The cameras hope to photograph and identify any Cape Leopards that are moving around in the area, but we also capture all sorts of interesting nocturnal animals such as this good looking guy. Large-spotted Genets are strictly nocturnal and are active from about an hour after sundown until an hour or two after midnight.

Although genets are generally terrestrial, they are agile climbers and not only scale trees but are quite capable of climbing a chicken-mesh fence. It was this attribute that led to an earlier experience of ours with a large-spotted genet. One morning we discovered that the birds in the fowl-run, including our daughter’s favourite duck, had all been killed overnight. Typically only heads had been eaten. We had to hurriedly bury the decapitated corpse of our daughter’s pet before she discovered it. This attack on the poultry left us with the impression that genets were solely carnivorous, but this, as we now discovered, is not the case. They do eat fruit when other prey is unavailable and, according to one authority, this is especially true of nursing mothers. Anyway the next evening we put some bananas outside and by the following morning they had disappeared so we presumed that our spotted friend was still in the vicinity. We now hoped that we might be lucky enough to see some of the mother’s off-spring, and now abandoned television for genet-spotting, but the nights went by without a further sighting. Even the bananas were left untouched. Perhaps she had found another source of food, or was wary of the interest we were taking in her.

A past of persecution in the Eastern Cape

At the start of the 20th century there were many people in Port Elizabeth who kept chickens at the bottom of the garden in order to supply fresh eggs for the table. Understandably genets appreciated this source of food and made themselves thoroughly unpopular with the homeowners. This resulted in a very effective anti-genet campaign. Shortly after this it was noticed that there were many more rats in the town than usual and it wasn’t long before there was an outbreak of plague. Genets not only attack poultry; they are also extremely efficient rodent killers. The absence of genets caused a population explosion of rats. One tinkers with nature at one’s peril.

Evening, I spotted a small spotted Genet in our garden tonight, we both were so stunned....and did not move for a while...unfortunately my phone was on charge and I could not take a picture. I quickly Googled it, wow!!!! To my surprise it is a Spotted Genet. I reside in Jeffreys bay....Aston Bay.
Hope you find this usefull.
Kind regards
Hes

Hi Hes, thank you for your comment. I hope you have seen the spotted genet again. With kind regards from Kariega.