I have spent the past week away from Kariega looking after other things. With me I have carried another amazing rhino experience which I shared with Jason in the dusk of the evening before I left. After several unsuccessful attempts during the preceding week to get a close up assessment of Thandi, things finally worked in our favour. And, girl, did she give us more than we bargained for.

With my levels of concern escalating after 9 days without a personal visual assessment of her injuries, and with the prospects of another 10 days away lying ahead of me, I felt quite anxious to put my own mind at rest that she was indeed doing OK. I really prayed that she would give us the glimpse I needed to be able to go away at peace in the knowledge that she was not under increasing levels of pain, that the maggots had not got a foothold somewhere, and that there wasn’t an area of infection contaminating the healing tissues around it. This was my last chance for a little while and so we had to push the boundaries a little further than I was comfortable with.

With the use of the technology donated by the Chipembere Rhino Foundation, we were able to narrow down the searching time enough to find this small insecure crash of rhino’s with just enough light available to get a look at, if luck went out way. They had ventured out into a collection of small clearings and with the wind and terrain favouring our movements we moved painstakingly towards the advancing rhino, who were grazing in our direction. From behind the last isolated brush-clump of cover, we could hear their chomping noises. At this point the decision was either to retreat and miss out all together or move forward at risk and sit tight.

I must say, had these rhino been in rightful possession and fully armed with horns, my eagerness towards a close inspection would have given way to the fear and respect they so definitely deserve. Foolishly, as I found myself thinking a short while later, 4 000 kg or so of rhino do not seem as lethal as when you add an armful of horns onto their profile.

So there we sat, with the prospect of a look at Thandi’s face becoming less appealing as the first rhino rounded the shrubs about 15 meters away. In the gloom I mistook her for Thandi and risked exposure to take a few photos of her dehorned face. I even risked a few muffled fingers clicks to try get her to turn towards me for a better angle of her wounds. Jason who was 2 meters closer to being road kill, used his unofficial yet unmistakable sign language to silence me and let me know that the correct rhino, Thandi, was approaching us against the shrub line, less than 10 meters away!

The answer came to me quickly and with complete clarity. NO, you idiot! Of course she doesn’t know you. Of course she doesn’t think you care! If she comes across your human profile trembling among the blades of grass she will think you are the human scum that stalked her 42 days earlier, whose evil smell and figure, raped her of a pain-free life of innocence, and stole her security and her identity and replaced all that was rightfully hers with pain and fear and shame.

In those slow-motion moments I knew, beyond doubt, that if she made the association between our dim outline and that of humans, we were going to be that awful representation of what centuries of persecution must have burned into the soul of every rhino. That sickening feeling of dread they must surely feel when in the presence of a confirmed human looms into their visual space. She would surely have no reason to trust in any of her previous experiences no matter how positive they were before the poaching. All humans, whether by sight, hearing or smell, must now the enemy. There to be feared, there to be avoided, and if flight wasn’t a self preserving option, then surely fear and rage would translate into a direct charge and a desperate attempt to kill or maim that which threatened her once again.

Thandi, now aware of our presence but not our significance, head raised, ears searching forward, took a few more curious steps closer towards us and stopped (see pic). Her face, at this distance gave me the best interpretation of her progress in 9 days. The relief of this privileged inspection was quickly shelved for later consideration. We were now well beyond any safety margins, less than 10 paces from a few tons of rhino who’s next decision would decide our fate. How seldom does the call between life and death, lie in their hands. How rarely, does the object of their persecution lie helpless before them. Would this rhino ever stand in this situation again holding the upper hand. Would the burden of fear and the responsibility of the decision ever be reversed for her in this way again? Without our weapons and our engineered fortresses, without our symbols of power and domination, we crouched there helpless and completely at the mercy of this rhino. 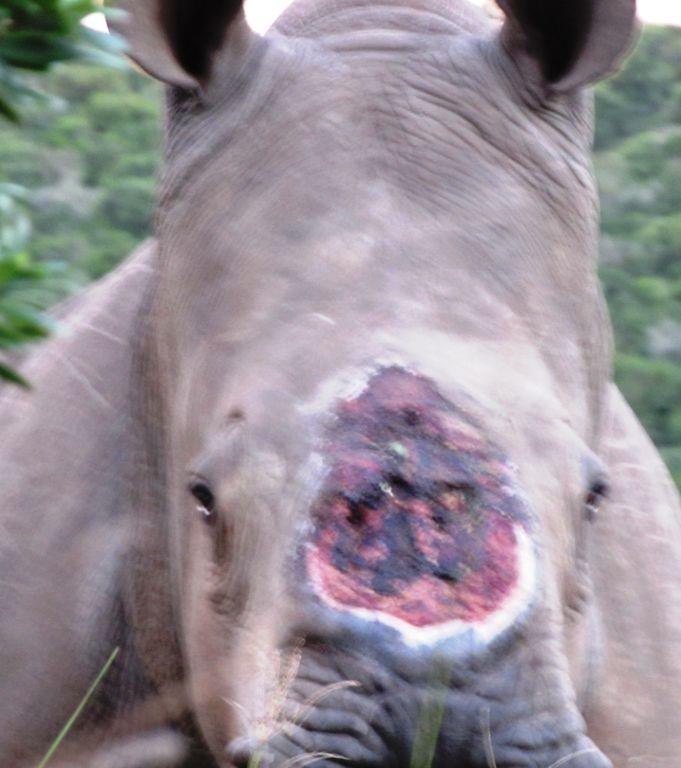 Thandi, who had no reason to show mercy, made her decision in those long drawn out moments, to choose the passive road forward. Everything I understood her to be possibly thinking should have pointed her the other way. Yet, this victim, this survivor made her choice to leave us alone. She gave a few short but soft snorts and huffs and took a few paces back before turning down the hill and striding off into the gloom of the African bush.

During the past week, this experience has played itself over and over in my mind. Given all that she has been through it’s yet another amazing rhino experience which will remain with me for the rest of my days. Yet again she touches my heart and inspires me to reflect on many things which we have yet to respect and appreciate in animals such as these. How much more we still have to learn from them.

Today is day 53. Yet again, many people will come together at that place of such contrasting emotions, bringing together a diverse collection of skills but with only one focused goal in mind. The help take Thandi, ALIVE, through her next surgical procedure. We come together apprehensive as we always are, but inspired by so many of you in this world who share our common purpose in supporting her through her healing process. You have expressed this in so many ways from donations, to words of encouragement towards the privileged few who will tend to her needs. Thandi lives, to tell her story, only by the way we are able to tell her story for her.

So much has happened over the past two weeks that will continue to take their story around the world. Amongst others, two days ago NBC in the USA posted their story on the Rock Centre web-site as a follow on to their February broadcast documentary. Click here to view their article and video "Poachers attack rhinos".